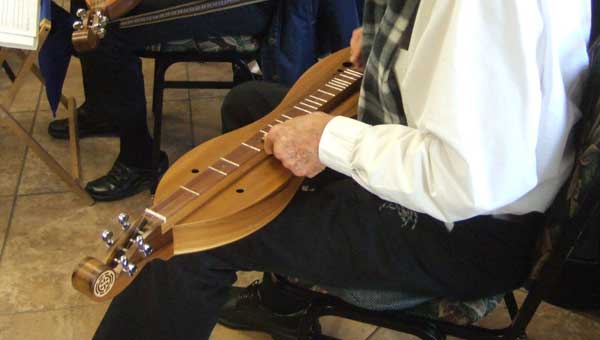 A member of the Shelby Strummers plays a dulcimer during a performance at the Pelham Senior Center. Photo by Katie McDowell.

On a Thursday afternoon, a group of musicians gathered in the Pelham Senior Center for a performance.

Some of the instruments were easily recognizable. One man had a bass, while another played the guitar. But, many in the band were playing dulcimers.

Specifically, most were playing “Appalachian” or “lap” dulcimers – a fretted instrument that is plucked or strummed to produce music.

Bob Sutton said the University Baptist Church in Montevallo started a local mission to form the dulcimer band in 2011. Since that time, the group has grown to more than 15 members and has played at churches, nursing homes, senior centers and the Montevallo Farmers Market.

“Since we’ve started, we’ve played quite a few gigs,” he said.

While the instrument is unusual, Bob and his wife, Sallie, insist the dulcimer is easy to learn.

The Appalachian dulcimer originated in the region of the same name in the 1800s.

At the Pelham Senior Center, Bob Sutton also played another type of the dulcimer with much earlier origins – the hammer dulcimer. The hammer dulcimer was popular in the Middle East during Biblical times, but it eventually made its way to America.

“When the pioneers were moving west, they didn’t want to move with the heavy piano,” he said. “This was a substitute for the piano.”

Bob Sutton began playing the instrument after seeing one in a dulcimer shop in Montgomery.

“I said, ‘This is neat; it sounds really good.’ So I went home and bought one on the Internet,” he said.

For the Suttons and other members of the Shelby Strummers, the instrument has offered both a challenge and a chance for fellowship.

The group meets every Tuesday at Camp Branch Church in Saginaw. The group will begin teaching beginner dulcimer lessons this year. It is also open to musicians who play other instruments.

“We welcome any instruments,” Bob Sutton said. “We’re looking for a fiddler.

Arts on the runway