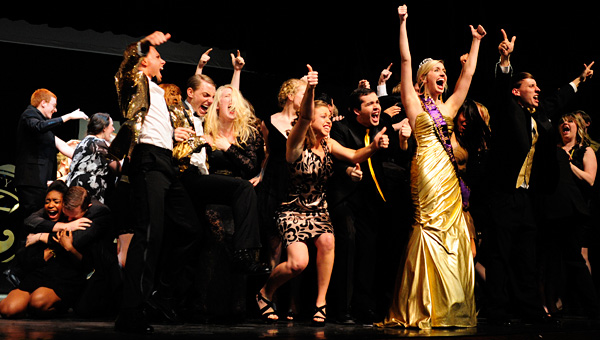 The Gold Team celebrates after winning College Night following the final show on Feb. 11 at Palmer Auditorium at the University of Montevallo. (Reporter Photo/Jon Goering)

MONTEVALLO – Before Student Government President Sherrod Hall even had a chance to finish speaking, the Gold side members erupted into cheers as Gold Victory won College Night for the second year running.

On Feb. 11, Palmer Auditorium was packed full of students and alumni alike sporting colors that represented their loyalty to either the purple or gold side for the university’s 94th annual College Night. The divided room rang out with cheers, taunts and songs throughout the evening.

“Thank you for always being classy and supporting your side,” Gold co-leader Lindsey Bristol to her team. “All the work you put into it pays off tonight on Palmer stage.” 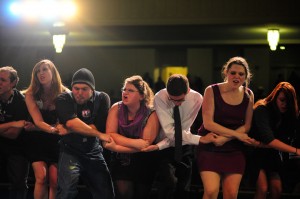 On the stage following their College Night loss, the Purple Side joins hands to perform its chant one last time before the evening's end. (Reporter Photo/Jon Goering)

College Night is the longest-running homecoming tradition in the country, according to UM President John W. Stewart III. The teams are judged on a point system. A panel of judges review the College Night performances and award “performance points,” while each team can earn “pre-performance points” earlier in the week through athletics, spirit levels and other events.

The students’ work began a little more than a month ago, as auditions for the night’s performance were held Jan. 3, Bristol said. Bristol and her co-leader, J.R. Burt, were elected a year ago and, along with their committee, chose the show in November.

“There’s not a single thing we would have done differently,” Burt said during intermission.

The Gold team wrote scripts, music, lyrics and staging, as well as created costumes and backdrops for “Three Ring Ransom,” a six-scene musical production set at the Ruebacker Mayhem Circus. 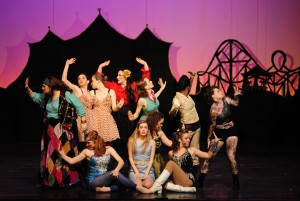 Members of the Gold Side perform their show during Saturday's performance. (Reporter Photo/Jon Goering)

The show featured characters in a traveling circus and their bitter ringleader, Araxia, played by Courtney Ladnier, who desired nothing more than to be a famous showgirl herself. After Emmaline, played by Julie Beasley, attempts to join the circus after running away from her wealthy family, Araxia plans a kidnap-and-ransom scheme with Emmaline’s family fortune in mind.