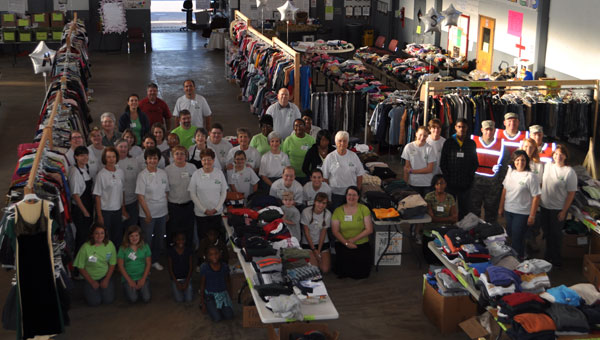 People use the phrase “I love you” loosely, i.e. I love chocolate, I love this dress, I love this song. But what is “love” truly?

Jesus defined love in John 15:13, “Greater love has no one than this, that he lay down his life for his friends.” Jesus exhibited the highest expression of love by giving his life not only for his friends, but even more he gave it for his enemies (Romans 5:6).

How do you express love? Are you willing to sacrifice what could cost you everything? This could be your time, your career or your bank account.

A group of Shelby County neighbors are committed to year ‘round work of promoting, preparing and giving away clothing twice a year (March and October) to help their neighbors in Calera, Shelby County and surrounding communities who are experiencing hard times. The group is Calera Acts of Kindness (AOK), though truly it’s acts of love.

“After several months of planning and a week of nearly 100 volunteers working 12-16 hours a days to prepare, clothing was distributed to more than 700 people. What a blessing to both the giver and receiver.”

Think of your fellow man. Give him a helping hand by sharing unwanted clothing. Gently used infant, children, teens, men’s and women’s spring and summer garments, shoes and stuffed animals can be dropped off at the Calera National Guard Armory on Eighth Avenue, Monday-Friday from 8 a.m.-4 p.m. through March 2. Clothing will be distributed Saturday, March 3, beginning at 8 a.m. and ends when there is no longer clothing or shoppers. Unclaimed clothing will be distributed to various charitable organizations.

Volunteers are needed. For more information, contact Krueger at 281-1975 or email helpaok@gmail.com.