Fellowship and coffee in a great atmosphere 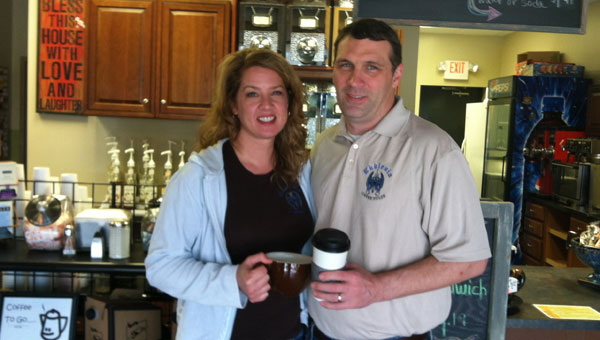 Terri and David Williams, newlyweds and new owners of Ekklesia Coffee House, say they have leaned on God’s mercy over their lifetime and believe they’re where they are today, in their business and in their personal lives, because of the grace of God. (Contributed)

Terri had lived in Shelby County for 18 years and in Chelsea for five. David lived in Prattville. Both worked for AT&T, David as an advertising executive, traveling south central Alabama, Terri as regional director, a position she still holds.

One of the things that attracted them to each other was a shared passion for the Lord. David said, “It has been his mercy and grace that allowed two broken roads to meet and join one another to begin the next phase of our lives.”

During the summer of 2011 David was recovering from major back surgery when Terri heard Ekklesia was closing. “Bells and whistles began going off in our heads and doors began to open,” David said.

It seemed a great place for him to get off the road, slow down with lingering back problems and become involved in the community.

He is operator of the coffee house, with help from three capable young people, Brett Copper, Masie Barnhill and Regan Cooley.

With advance notice, they deliver to local schools and businesses.

Free Wi-Fi, personal one-on-ones, business, church, club, showers and other meetings take place in their comfy meeting area. Their goal? To “provide a warm satisfaction and a great cup of coffee.”

David Williams has three children, Lauren and Andrew, students at Auburn University, and Hasten, a senior at Lee-Scott Academy in Auburn.

He and Terri attend Double Oak Community Church, where Terri has belonged seven years and sings on the praise team. David joined a few weeks ago.

God plays a role in everything they do, David said “We continually seek his guidance every step of the way in our life, whether it’s the kids, future plans or just the day-to-day. We humbly rely on him daily for his wisdom in order to play the roles he assigns us today.”

A love story for Valentine’s Day