Spartans too much for Jaguars 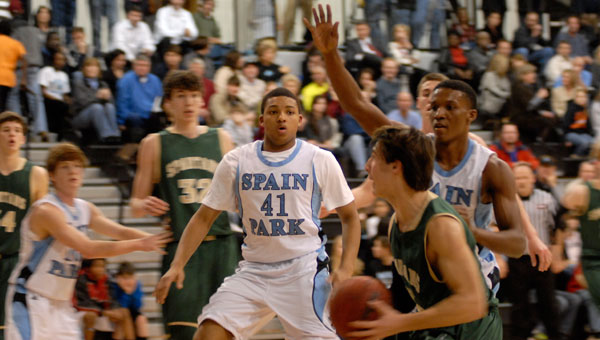 After his Jaguars defeated Mountain Brook twice in AHSAA Class 6A, Area 12 play in the regular season, the Spartans turned the table in a 49-42 win over Spain Park in the postseason area tournament championship game Feb. 13.

“In our (area), anybody can beat anybody on a given night,” Barker said. “Everybody says that. It’s going to be the team that plays better that night.”

Eric Washington led the Jaguars (22-10) with 18 points, including 14 points in the second half, in the title game. Washington finished 5-of-8 from the field, including 2-of-3 from beyond the arc, and knocked down 3-of-5 free throws.

Robby prater added 12 points, but he hit only 3-of-12 field goals, including a 1-of-9 performance from the 3-point stripe. Rembert Martin added eight points and grabbed a team-high six rebounds.

Spain Park held Mountain Brook senior guard Mario Stramaglia, who entered the game as the Spartans’ leading scorer, to only three points. However, the Jaguars struggled to contain forward Sean Eaton, who scored a game-high 24 points on his way to earning the most valuable player honor in the championship game.

Mountain Brook jumped out to a 8-2 lead in the first quarter following a three-point play by Eaton with 4:22 left in the opening period. The Jaguars responded with a 5-0 run following a 3-pointer by Prater and a jumper by Washington to end the first quarter, which cut the deficit to one point.

The Spartans went on a 7-0 run late in the second quarter to take their first double-digit lead in the game, 24-14, with 1:04 left in the first half. Prater knocked down two free throws in the final minute to cut the Jaguars’ deficit to eight points at halftime.

However, the Spartans slowly rebuilt their double-digit lead and a three-point play by Eaton with 2:30 remaining in the game gave Mountain Brook a commanding 44-31 lead and effectively iced the victory.

Spain Park will travel to face rival Hoover in an AHSAA Class 6A sub-region game Feb. 17, with a berth in the Northeast Region tournament riding on the outcome.

Barker said he expects a similar battle Friday night. The Jaguars and the Bucs split a pair of regular-season meetings with each contest decided by less than nine points.

Despite the setback against Mountain Brook, Barker said he expects his Jaguars to bounce back against Hoover.

“We’re not going to give up,” Barker said. “I’ve never faulted their effort and will to win.”

Spain Park will travel to Hoover in an AHSAA Class 6A sub-region contest Feb. 17 with a trip to the Northeast Region tournament riding on the outcome.