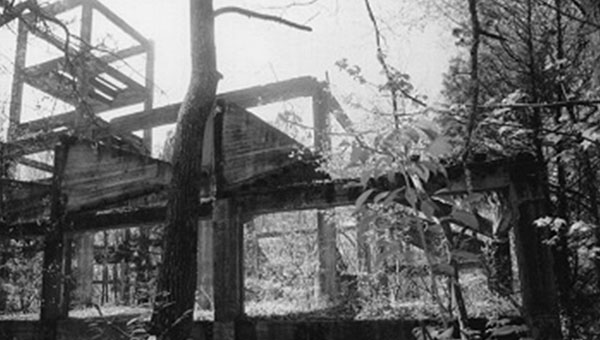 The remains of the old Shelby Chemical Company are located on the land donated to the Historic Shelby Association. (Contributed)

COLUMBIANA – Buchanan Forest Management has  gifted 12.77 acres of historical property to the Historic Shelby Association, specifically for the use of the Shelby Iron Works Park, according to historian Jerry Willis.

The property contains remains  of portions of facilities that were operated by Shelby Iron Company,  including furnaces, the frame of the Shelby Chemical Company building as well as various underground components.

“We would like to make an archeological survey to see what’s there,” said Willis. “Were going to try to hand-clean the underbrush and see what can be salvaged.

“It’s very exciting. It’s something we never thought we’d see,” he added. “It has potential.”

Willis said that the long-term plan is for the park to expand to include the 12.77 acres into the existing park area.

Bobby Joe Seales, president of the Shelby County Historical Society, said that the donation was “wonderful.”

“I am so very pleased to hear that,” Seales said. “I really appreciate the donors. That is just great.”