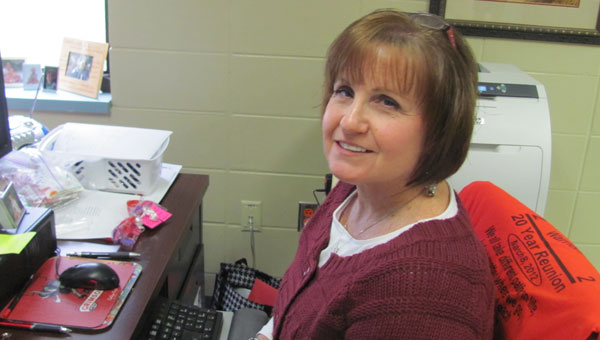 In our city, the face of Linda Miller Oliver is familiar to many people. Years as a team mother and supporter of youth and high school sports, cheerleading, PTO and other activities all moms are expected to do, she now has been the secretary at Creekview Elementary since 2002.

Of course, she has been married to Alabaster Police Chief Stanley Oliver for 40 years, so she has lots of patience skills and trust in God.

Oliver transferred to Thompson High School in the 10th grade when her dad transferred with his job. The family built their home in Indian Springs. A studious, serious student, Oliver had to go into the yearbook sponsor’s classroom to ask an important question. “Some guy in the back of the room stood up and loudly asked my name. I was mortified,” she said.

“Martha Luker (the THS secretary) typed an invitation from Stanley asking me to the prom — our first official date. I truly believe God brought us together,” she said.

Son-in-law Brian Baker and daughter-in-law Chera Hatcher complete their family. Little pleasures, such as a trip to the beach, reading, eating out, attending home church Westwood Baptist (since 1981) and games with grandchildren are just a few of the things that keep Oliver busy.

Oliver’s son, Jonathon, is in Afghanistan where he trains policemen. She prays for his safety and looks forward to seeing him in Germany this summer. Son, Stan, is with the Shelby County Sheriffs’ Department. This, plus Stanley being police chief, could be an awful stress, but Oliver clings to Jeremiah 29:11: “I know the plans I have for you; to prosper and not to do you harm; plans to give you hope and a future.”

Her faith in God carried Oliver through the worst day of her life, Feb. 29, 1989, when Stanley was shot. “I was home with a migraine headache. It’s awful, just awful, to open your door to uniformed police with bad news,” she said.

“Definitely 1988 and 1989 were the worst two years of my life. Everything just seemed to pile up. I lost my mom, Stanley was shot and my son Stan, through no fault of his own, missed his fifth-grade trip to Washington.”

After these tough times, Oliver finally fulfilled a promise to her daddy and herself. She had worked full-time at Western Electric, and decided to get her college degree by going part-time to UAB and Faulkner. In 1992 Oliver got her business administration degree. That’s determination!