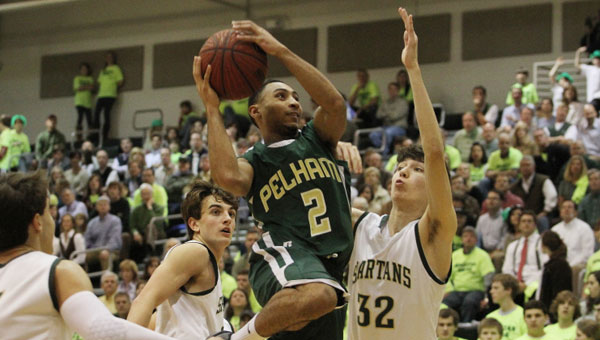 The Pelham High School boys’ basketball team did more than hang around for most of an Alabama High School Athletic Association Class 6A sub-region matchup at Mountain Brook, withstanding several Spartan runs, but it was a 13-2 surge by the home team to close the game that sealed the 54-37 final score and ended the Panthers’ season Feb. 17.

Mountain Brook, the Class 6A, Area 12 champion, used runs in each of the first three quarters but couldn’t shake Pelham, which answered every time the Spartans thought they had some breathing room.

“In the second half, we kept making a run to get close, but we could never get over the hump,” said Pelham coach Joel Floyd, who has now guided the Panthers to back-to-back AHSAA Class 6A sub-region appearances.

The Panthers, the Class 6A, Area 10 runner-up for the second consecutive year, were outscored 15-4 at the free-throw line in the game and never got to the charity stripe in the second half.

“They do such a good job defensively in not allowing you to get to the basket,” Floyd said.  “We had a bunch of threes that were good looks that we didn’t knock down.

Mountain Brook senior guard Mario Stramaglia scored 11 of his 12 points in the final period and played a key role in the Spartan pulling away at the end.

Senior Xavier Lacey, Pelham’s leading scorer, connected in the lane to give the Panthers (16-13) an 8-5 lead with 4:58 to go in the opening quarter, but it would be the last Pelham lead of the game as Mountain Brook closed the quarter with an 8-0 run.

The Spartans (24-9) used five first-half three-pointers to build a 27-19 lead at intermission, finishing the second period with a 9-2 flurry.

“We knew it was going to be a game that would be tough the whole time because they play so hard,” Floyd said.  “Offensive rebounds really hurt us in the first half.  I think they had four threes that came after an offensive rebound.”

Kenny Meadows hit a 3-pointer for Pelham to cut the Mountain Brook lead to 27-22 two minutes into the third quarter, but the Spartans then scored eight straight points to build a 35-22 advantage four minutes later.

Senior point guard Matti Sigurdarson inflicted the most damage on Pelham in the first half as he scored 11 points in the opening 16 minutes and connected on three treys before halftime.  Sigurdarson was the game’s leading scorer with 16 points.

Jeremy Berman was the third Spartan to reach double figures as the junior finished with 11 points to go along with six rebounds.

Lacey closed his Pelham career with a team-high 12 points, but he was held to only two in the second half.  Meadows finished with 10 points and a team-best six boards.

The Panthers committed 18 turnovers against the aggressive Spartan defense while Mountain Brook had 14 miscues.  The Spartans outrebounded Pelham by a 29-23 margin.

Despite the season coming to an end Friday, Floyd spent part of the postgame talking about the success the program has experienced the past two years.

“I’m very proud of our young men,” Floyd said.  “I told them to keep their heads up.  Our seniors last year helped get things started and the guys this season helped us take this program another step.  I’m extremely proud of what they did this year and what they did tonight.

“We’re ecstatic what where we’re going (with this program) and what we’re doing, because we’re going to continue to get better,” Floyd said.   “Once you get to this point, anything can happen.  Just to get here is what you need, but you have to figure out a way to get one of those wins (to get to the regional).”