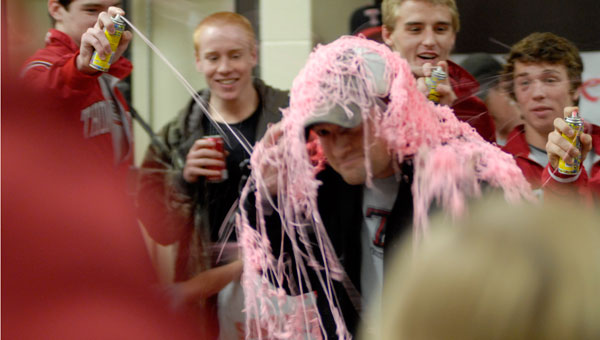 Weltzin would take all the punishment in the world as long as his Warriors continue to rack up Alabama High School Athletic Association Class 6A state championships, which led to a crowd of more than 100 Thompson faithful waiting for the defending state champions to return from the Von Braun Center in Huntsville at an impromptu pizza party at the school.

“It’s really good to see all the people that actually care about wrestling,” Weltzin said. “It’s a minor sport, but when you see something like this, it shows people care. It means a lot to the kids involved in the sport.”

The Warriors, fresh off their second consecutive AHSAA Class 6A team championship, received an escort to the school by the Alabaster Police Department and Shelby County Sheriff’s Office once they arrived back in the city. 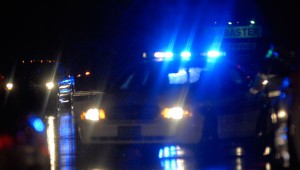 Thompson senior Jesse Masters, who claimed the AHSAA Class 6A 182-pound individual championship earlier in the day, beamed with pride after seeing the reaction from his hometown.

“It’s good to see all of the support,” Masters said.

Thompson set a new AHSAA Class 6A record after racking up 231.5 points, which eclipsed Grissom’s record of 219 points set back in 2004. Grissom finished runner-up to the Warriors this season with 142 points.

Masters won his first AHSAA state championship after earning a 9-2 decision over Hayden Henderson of Grissom in the 182-pound championship match.

Conner Gilson of Thompson finished runner-up after dropping a 3-0 decision to John David Henderson of Grissom in the 106-pound title match.

Brewer Gilliland of Thompson fell in a 11-3 major decision to Ben Smith of Buckhorn in the 132-pound championship match and finished runner-up.

Cody Albarado of Thompson finished runner-up after dropping a 3-1 double-overtime decision to Mark Garlington of Hoover in the 138-pound title match.

Three other Thompson wrestlers placed in the state tournament.

Austin Gould of Thompson came in third place in the 113-pound division after earning a 6-3 decision over Gene Thagard of Mountain Brook in the third-place match.

Mario Haynes of Thompson finished fourth in the 126-pound division after dropping a 5-4 decision to Morgan Paugh of Vestavia Hills in the third-place match.

Reed Jacks of Thompson came in fifth place in the 120-pound division after pinning Blake Rogers of Bob Jones in 1:18 in the fifth-place match.

FROM STAFF REPORTS The Oak Mountain High School boys’ soccer team won both of its opening round matches in the... read more