Alabaster to appear on national TV 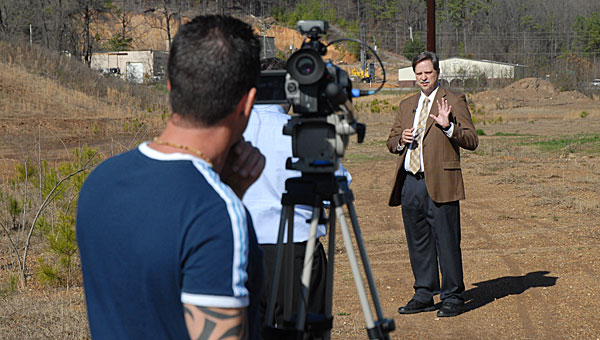 Aronov Vice President of Development John Argo, right, speaks during an interview with "Today in America" cameraman Garrett Cattacus on Feb. 20. Alabaster will be featured on the national show in about nine weeks. (Reporter Photo/Neal Wagner)

Alabaster officials spent the day Feb. 20 with a cameraman as they shot footage for a segment on a national show spotlighting “America’s hidden gems.”

Throughout the day, Alabaster Mayor David Frings and City Administrator George Henry toured around the city with cameraman Garrett Cattacus while shooting footage of many areas of the city for a segment on the “Today in America” show, which stars Terry Bradshaw.

The show is distributed and aired on several national television networks, including CNN Headline News, Ion and Fox Business Network. Frings said Alabaster’s segment likely will air once nationally on CNN in about nine weeks before airing 19 times on several regional television networks in the Southeast and along the Interstate 65 corridor. Air dates and times have not yet been finalized, he said.

Alabaster will also receive a copy of the seven-minute segment to use for marketing purposes, Frings said.

Frings said he was contacted by Today in America in summer 2011, and conducted several conference calls with show officials before learning Alabaster would be featured.

“We just had to tell them about why Alabaster is a hidden gem,” Frings said. “This show is supposed to highlight recreation, family fun and business success, because it takes all three of those to have a successful city.”

During the day, Cattacus and city officials traveled to several locations around the city, including Shelby Baptist Medical Center, Veterans Park, Joe’s Italian restaurant and the Alabaster Senior Center, where they shot footage and interviewed city leaders and residents.

At 2 p.m., Cattacus shot footage at the future site of the Alabaster Exchange shopping center, which is scheduled to be built by the Montgomery-based Aronov company next to the southern wing of the Colonial Promenade shopping center.

During an interview for the show, Aronov Vice President of Development John Argo explained why he decided to bring the shopping center to Alabaster.

To learn more about Today in America, visit Todayinamericatv.com.