Antique “Roadshow” is at Handley’s barn 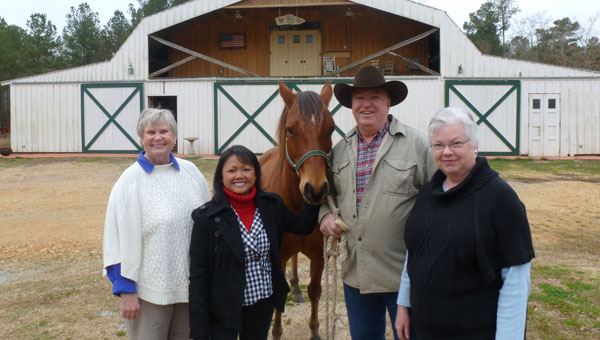 The Friends of the Columbiana Library and City of Columbiana are sponsoring the first Central Alabama Antique and Appraisal Market from 9 a.m. to 4 p.m on March 3 at Dr. Stancil and Somsup Ann Handley’s barn located at 245 Old Highway 25 West, Columbiana.

Admission is $5 and items to be appraised are $5 each (limit three per person).

The Handleys offered their “SS Barn,” named for Stancil and Somsup, located across the road from their historic home built in 1892 by Joe Verchot, a French Civil War immigrant who owned mills in Columbiana and Wilsonville, which supplied charcoal to the Shelby Iron Works. Since 1980 when Stancil bought the home, the Handleys have continually been restoring the French farm house.

“I am just the caretaker,” said Stancil. “It is my privilege to take care of this treasure. You could not even see the house for the kudzu when I bought it for it had been vacant for eight years.”

In addition to restoring the Verchot home, Stancil has wanted to build his “dream” barn since a small child, a home for their nine horses and donkey. Alan and Betty Fulton’s barn in Montevallo was the perfect exterior design, and the Handleys drew the interior plans.

The Handleys began building the barn in 2003. It soon became a project of committed family and friends.

The lumber was sawed on site with a portable saw mill owned by Ronnie Lee from trees from the land. Tommy Jones helped hang the huge sliding doors. Governor Reed helped pour the concrete and stamp the floors. Son KC helped in every step of the building. Son Philding worked except for a four-year hiatus with the Marines. Ann hammered and laid brick floors.

In January 2010, KC and fiancée Kayla asked if they could have their wedding reception in the barn, which was the impetus to complete the barn. On July 17, 2010, more than 500 guests came to KC and Kayla’s reception. The barn has been used for other receptions, fundraisers, and events leading up to the library fundraiser.

The horses, however, have never spent a night in the barn!

Bring your treasures on March 3rd and have a fun day antiquing in the SS Barn.

Have forge, will travel – to Cowboy Day