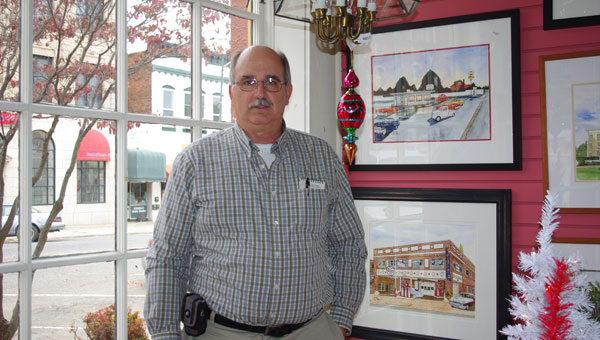 Michael Joe Moore’s watercolors can be viewed in museums, galleries, homes and other locations in several states, Canada and Europe. One of his most recent ones depicts his grandparents’ old house in Chelsea. (Contributed)

Michael Joe Moore has lived in North Carolina for the past 20 years, working in the foundry industry as an engineer and foundry manager.

But memories often bring him back to Shelby County, Alabama, and his grandparent’s old house in Chelsea, as depicted in one of his most recent watercolors.

“The house sat on rich pine logs, and rocks in some places,” he recalls. “The floor was only one layer, and I can remember as a child watching the chickens under the house through a knot hole in the floor.”

His grandfather built the house in 1904, Moore said, and his grandparents Blanton “Blantie” and Josie Gamble Moore lived in it for 64 years.

Moore’s painting of the old house is only one of around 300 watercolors he has done since switching from oils about five-and-a-half years ago, he said.

Combining his passion for history and painting, Moore paints mostly historical scenes. His watercolors include Andy Griffith’s hometown and other historical landmarks in North and South Carolina.

His Alabama pictures include the Shelby County courthouses, scenes at University of Montevallo, University of Alabama and Auburn. A sample of Moore’s work is readily visible in downtown Columbiana, on the old Columbiana Leader building.

The originals of most of his watercolors have been sold, along with prints of the originals, postcards and greeting cards. Some were commissioned. Some were donated to charities.

Moore’s work has also appeared in trade magazines and on calendars. It hangs in museums and art galleries, and has been collected by customers in several states, Canada and Europe.

Michael Joe Moore grew up in Columbiana, son of Joe and the late Dorothy (Dot) Moore. He attended University of Montevallo and University of Alabama on scholastic scholarships.

His great-grandparents, William Riley and Fannie Hathaway Moore, were early settlers to the Chelsea area.

The house his grandfather “Blantie” built sat on 200 acres of farmland, Moore said. “My granddaddy farmed for a living, never working a public job and never owning a tractor.”

The house still stands along side Shelby County 74 in Chelsea.

To read more about Moore, view his work or find information about purchasing his watercolors, check out his web pages at Watercolorsmjm.com or on Facebook.

Fellowship and coffee in a great atmosphere

Terri and David Williams, newlyweds and new owners of Ekklesia Coffee House, say they have leaned on God’s mercy over... read more