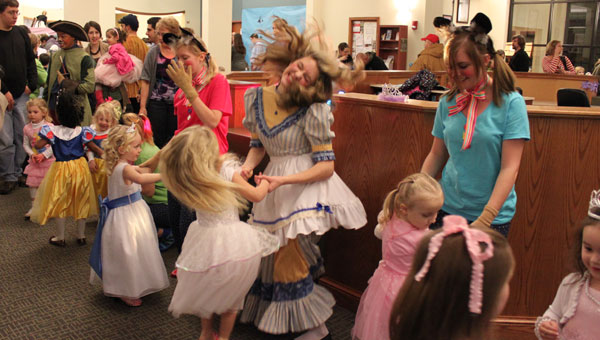 CALERA – Tiny princesses, princes and a variety of other fairy tale characters danced through the aisles of the Calera Library Feb. 20 during the fourth annual Fairy Tale Ball.

In addition to the ball, the day included a princess tea and breakfast at Calera High School.

“We had 120 at the tea and 130 at breakfast,” said Rhonda Cracraft, vice president of the Friends of the Calera Library. “It was a success.”

Cracraft said 42 characters entertained children during the ball, including this year’s addition of Puss ‘N Boots, the Fiddler from the “Cat and the Fiddle” and the seven dwarves.

“We’re already talking about next year; it’ll be five years,” she said. “We’re planning on having Ariel with real fish and real water.”

The night featured a daddy-and-daughter dance and a dance for anyone having a birthday. The Shelby Stompers performed, then the characters came out of their respective areas to frolic with the children. 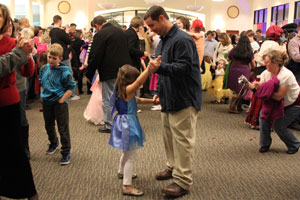 Jordan Cracraft and Carrie Glass played the Big Bad Wolf and Red Riding Hood. Both characters have participated all four years of the ball.

“It’s great to come and see the kids,” Glass said. “A lot of them don’t get to come to stuff like this.”

“It’s a lot of fun because it makes the kids so happy,” he said.

Danny Fafack wielded his fiddle as the Fiddler from the “Cat and the Fiddle.”

“My son, who’s 2, goes to a kid’s program at the library, and my wife signed me up,” he said, laughing. “It’s been a blast, and there are a lot of fun people. All of the kids are loving it, and it’s fun to see their faces light up.”

The 'Welcome to Columbiana' sign on Chelsea Road was destroyed after it was allegedly struck by a car. (Reporter Photo... read more