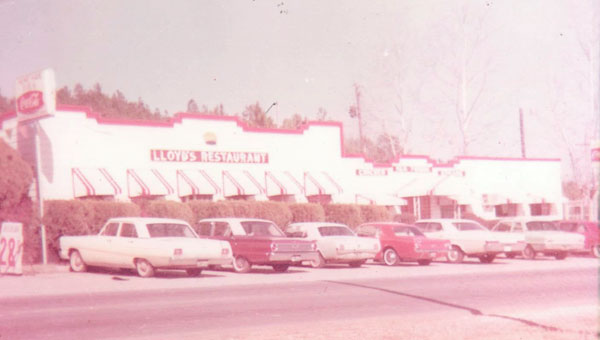 For decades, Lloyd's was located in Chelsea on Old Highway 280 before moving to its current location. (Contributed)

NORTH SHELBY — For 75 years, Lloyd’s Restaurant in North Shelby has offered a comfortable place to relax, visit with friends and enjoy a home-cooked meal.

Eli Stevens, who has owned the restaurant for 41 years, has memories of Lloyd’s much older than that.

The Chesser family first owned the restaurant, which was named after family member Lloyd Chesser. However, Stevens’ family had an important connection.

“My family used to sell them bread,” Stevens said. “In the early ‘60s, they started selling bread to the Chessers.”

At that time, the restaurant was located on Old Highway 280 in Chelsea.

“When they built the new highway (280), it bypassed Old 280,” he said. “I needed to move because there were utility problems there. I had to make a change.”

Stevens had to make a decision — would he move east towards Harpersville, or west towards Birmingham? He chose to move west, and set up shop in 1978 across the highway from a service station in North Shelby — the restaurant’s current location. At that point, the two were the only businesses in the area.

In the mid-1980s, U.S. 280 began booming, and Stevens found himself with plenty of neighbors.

“One of the key elements was (Interstate) 459. You were able to get here from Roebuck, Bessemer and Trussville,” he said.

While Stevens appreciates the business U.S. 280 brings to his door, he said the traffic problems have been frustrating at times.