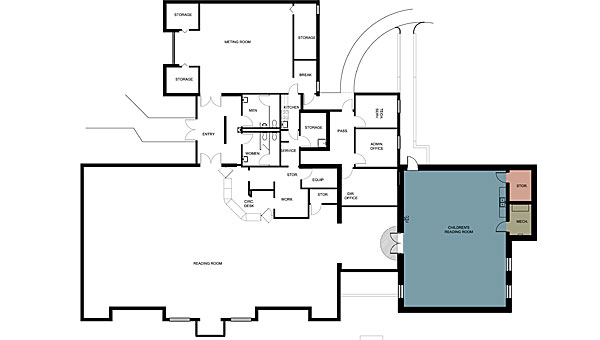 A new children's reading room, highlighted in blue, could be completed as early as this summer at Alabaster's Albert L. Scott Public Library. (Contributed)

Alabaster’s Albert L. Scott Public Library could have a new 1,517-square-foot addition as early as this summer, after the Alabaster City Council voted 6-1 to fund the project during its Feb. 20 meeting.

The original price estimate for the project was about $185,000, but the lowest bid came in at about $226,000 after city officials added more square footage to the expansion.

Once completed, the expansion, which will be built next to the library’s current children’s section, will contain a large children’s reading room, a storage closet and a mechanical room.

Alabaster Mayor David Frings said the new addition will replace a mobile unit placed on the library property nearly a decade ago as a “temporary fix.”

“It’s been out there way too long. It was supposed to be a temporary Band Aid to give them more room,” Frings said. “We were always told that there were utilities in the way, and we couldn’t add onto the library. But it’s now come to light that those utilities were on the edge of the property, and that adding on is a viable alternative.”

Frings said crews will work to have the addition completed by the time the library’s summer reading program begins in a few months.

Walters said he voted against funding the project because of cost concerns.

“It was my understanding that we could have scaled it back and gotten it back to the $185,000 price we were originally told it would cost,” Walters said. “In my opinion, a quarter-million dollars is too much for four walls, a sink and a closet.