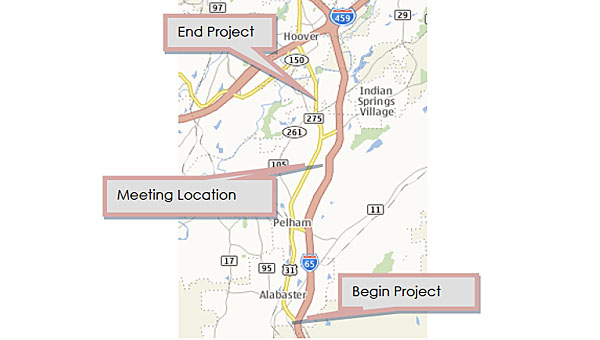 The Alabama Department of Transportation will hold a public input meeting on March 7 at the Pelham Civic Complex to discuss a proposed widening project on U.S. 31 from Alabaster to Hoover. (Contributed)

Alabama Department of Transportation officials will give local residents a chance on March 7 to learn more about a plan to widen U.S. 31 to six lanes from Alabaster to Hoover.

ALDOT will hold the meeting from 4-7 p.m. at the Pelham Civic Complex, and will discuss plans to add additional lanes on U.S. 31 from the Interstate 65 Colonial Promenade exit in Alabaster to Riverchase Parkway in Hoover.

“We’ll look at reducing some of those access points. We want to have the right amount, not too many and not too few,” Davis said. “It’s going to be a point of contention, because some businesses won’t have a median access point right in front of their business anymore.”

Davis said the project’s timeline is dependent on environmental issues, federal funding and other factors, and said it is “still too early to say” when the project will start.

The March 7 meeting will begin with an open house session at 4 p.m., during which ALDOT engineers will present project plans and maps.

Those who wish to provide comments on the project must register at the sign-in table or submit a written comment form during the event.