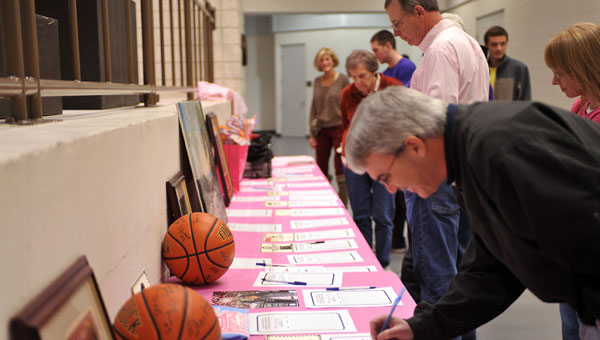 The Falcons were able to raise just under $1,300 and are still growing that number with the sale of their Play 4Kay T-shirts.

Play 4Kay is a global, unified effort for a nation of coaches to assist in raising breast cancer awareness on the court, across campuses, in communities and beyond. The Kay Yow Cancer Fund, in partnership with the WBCA and The V Foundation, is the official Play 4Kay charity.

The Falcons hosted five breast cancer survivors at the game.

The five survivors included Mary Beth Armstrong, Veronica Smitherman, Kittye Keener, Susan Thompson and Dawn Rasco. The five were honored at a halftime ceremony, along with two women who could not be in attendance. Senior Davia Harris walked in the ceremony for her mother Mary Harris, while former Montevallo men’s basketball player R.J. Severtsgaard walked in honor of his mother Karen Ahrens.

The team also had a banner where fans could add family and friends names that had passed from this terrible disease.

The team also hosted a silent auction that lasted throughout the game. There were a number of high ticket items, including a painting worth more than $400.

The cheerleaders also got into the Play 4Kay spirit by wearing pink T-shirts and using pink pom-poms throughout both the men’s and women’s basketball games.

The Montevallo Mass Communications Department put together a halftime video that was used on the UStream broadcast. The T-shirts featured in the video are still for sale, and if you are interested in purchasing one, please contact women’s basketball coach Cindy Hilbrich by email at hilbrich@montevallo.edu. The shirts are just $10 and all proceeds go to the Kay Yow Cancer Fund.