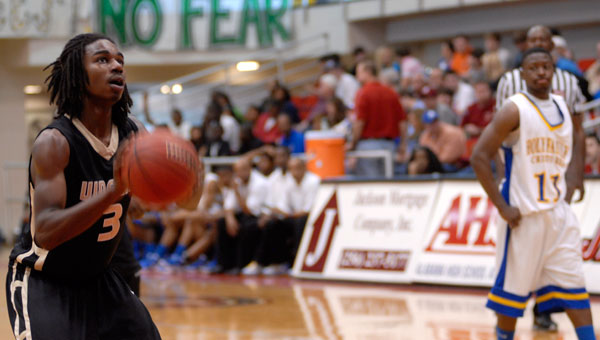 JACKSONVILLE — Vincent High School senior Dontravious Moon’s heart was telling him one thing, but his mind left him with a disbelieving image in the final seconds ticking off the clock in the Alabama High School Athletic Association Class 2A Northeast Region tournament championship game at Pete Mathews Coliseum on the Jacksonville State University campus Feb. 23.

After multiple gut-wrenching endings in the Yellow Jackets’ previous four trips to Jacksonville, including a heart-stopping last-second loss at the buzzer a year ago, Moon couldn’t believe his eyes were watching teammates erupt in celebration of an impending trip to the AHSAA Class 2A Final Four following a 55-47 win over Holy Family Catholic in the region tournament title game.

“It can’t be real,” said Moon, recalling the thought running through his mind with time winding down in the game. “I was just happy.”

The Yellow Jackets, who are one of the final four teams remaining in the state tournament for only the second time in school history, will face the winner of the Central Region championship game, Central-Hayneville or Lanett, in the AHSAA Class 2A semifinals Feb. 28 at 4:30 p.m. at the Birmingham-Jefferson Convention Complex in the school’s first trip to the Final 48 tournament. Vincent’s 1980-1981 squad finished runner-up in the state tournament in a different postseason format.

Vincent coach John Hadder said his players deserve to end their season at the BJCC.

“I’m thrilled for the guys,” Hadder said. “It’s gratifying to see them work hard for a purpose and see the reward.”

Moon, who was named the Northeast Region tournament’s most valuable player, led the Yellow Jackets (26-6) with a game-high 27 points in his team’s fourth win over Holy Family this season. Moon, who shot 8-of-13 from the floor and knocked down 11-of-16 attempts from the charity stripe, also grabbed a team-high eight rebounds.