Let the play begin in Alabaster 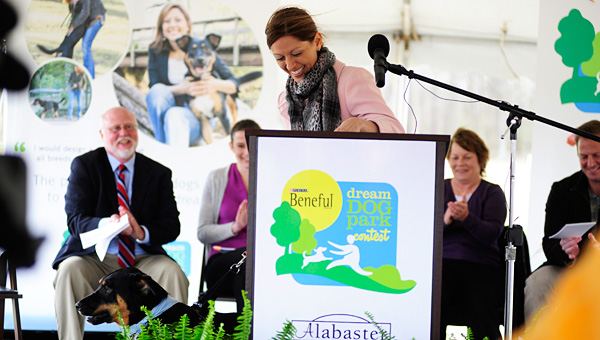 Jenny Wilson, executive director of the Shelby Humane Society, won the 2011 Beneful dream Dog Park Contest by best answering the following question, If you had $500,000 to create a dream dog park for you and your best buddy, what would you do? Wilson caught the attention of the judges Jason Cameron and Arden Moore with her entry explaining her ideas for the park and her relationship with her dog, Honey Belle.

“Jenny’s dream idea really rose to the top,” said Cameron at the groundbreaking. Cameron is a licensed home improvement contractor and host of the DIY Network’s “Desperate Landscapes.”

“I’m looking at it from the dog’s perspective,” Moore said, “and it will be safe with plenty of amenities. Let the play begin!”

Cameron unveiled the park’s blueprint, and the park will include two water features, a rubber walking track, tunnels, bridges, a splash pad for small dogs and more.

“We want to bring owners and dogs together to play, and that’s what it’s all about,” Cameron said.

Alabaster Mayor David Frings said residents are excited about the addition to their community.

“We have a large number of citizens who love four-legged friends already,” he said. “They can’t believe it. They’re in disbelief and awe, but it has come to reality. It’s going to happen.

“There are not too many times when someone gives you a half-million-dollar gift,” he said. “We have a lot of citizens that use this park to exercise with their dogs. The plans Jason and Arden came up with are truly, truly beautiful.”

In addition to the dog park makeover, Wilson received $10,000 as the grand prize winner and a year’s worth of Beneful dog food, which she donated to the humane society.

Wilson said she and Honey Belle are excited to be a part of the dog park.

“Honey Belle was found as a stray at Veterans Park before I adopted her from the Shelby Humane Society,” she said. “It’s the thrill of a lifetime to win this contest. We can’t wait to play with all of you when this is complete.”

By NICOLE LOGGINS / Staff Writer PELHAM – Jackie Ikner, 46, thought she was suffering from an asthma attack in... read more