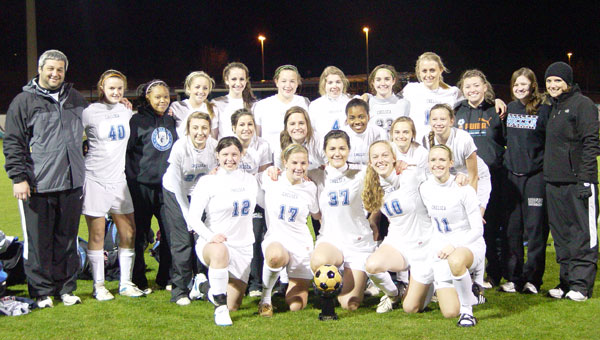 The Chelsea High School girls’ soccer team did not surrender a goal in its run to the school’s first Lakeshore Shootout B Division title in school history Feb. 25.

Goalkeeper Ashleigh Niven was in goal to record all five shutouts.

The Hornets played to a 0-0 draw with Pope John Paul II in pool play Saturday morning with Chelsea advancing on the tie-breaker.  In the semifinals, Chelsea defeated Fort Payne 1-0, with Chelsea capitalizing on a foul by Fort Payne in the penalty box.  Sophomore Britne Holderby converted to give Chelsea the victory 1-0.

In the finals, Chelsea faced off against Faith Academy from Mobile.  The teams played to a 0-0 draw in regulation and to the end of the first overtime period.  Early in the second overtime, Britne Holderby played a rocket of a cross from the left side of the defense that deflected off a Faith Academy defender and found the back corner of the goal for the golden goal victory.

“It was an outstanding defensive effort,” said Chelsea coach Jonathan Hammett. “The entire team played great defensively at all positions.  We played consistently in every game.”

“I am very proud of these young ladies,” Hammett added. “They played with heart, determination, and focus.  Our goal every game is to finish stronger than we started.”