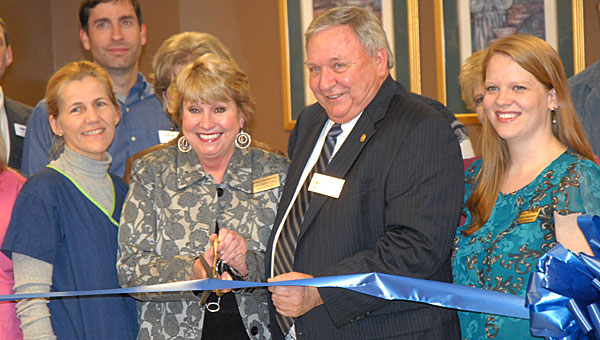 The Pelham-based free Community of Hope clinic will be able to double the number of patients it serves each week, after the clinic recently acquired about 2,000 square feet in the Shelby County Health Department building.

For the past several years, the Community of Hope has been serving patients during free Thursday night clinics held in the Shelby County Health Department exam rooms.

In addition to the Thursday night clinics, Community of Hope will now be able to open its doors from 9 a.m.-3 p.m. on Mondays, said Clinic Executive Director Chris Monceret.

After a state health agency moved out of the 2,000-square-foot space in the back of the Health Department building off County Services Drive, Monceret said she and other clinic officials started working to move into the space.

“This is something we have been working on for a long time,” Monceret said during the expanded clinic’s ribbon-cutting ceremony on Feb. 28. “The Thursday night clinic will stay exactly the same, but it will allow us to hire new staff.

“This will double our capacity for seeing patients,” Monceret added, noting the expansion will allow the clinic to hire a registered nurse, a new doctor and a nurse practitioner.

The clinic’s new space includes cubicles for clinic staff, a waiting area, exam rooms, a small kitchen and a meeting room. Every piece of furniture and equipment in the new space was donated, Monceret said.

As the economy has declined over the past few years, the number of patients at Community of Hope has steadily increased, Monceret said. Community of Hope’s Thursday night clinics consistently see large crowds, she said.

“The economy has gotten worse, and that translates to more people not having health insurance,” Monceret said, noting the clinic has seen a rise in the number of middle-aged patients.

Pelham Mayor Don Murphy praised the clinic, and said Community of Hope makes an important role in the community.

“You’re taking care of a need we have, and you’re helping people all over Shelby County,” Murphy said. “We’re proud to have y’all in Pelham.”

Monceret said she one day would like to expand the clinic’s operational hours and days.

“I know we are in the wealthiest county in the state, but there are a lot of people hurting, and we see it every day,” Monceret said.