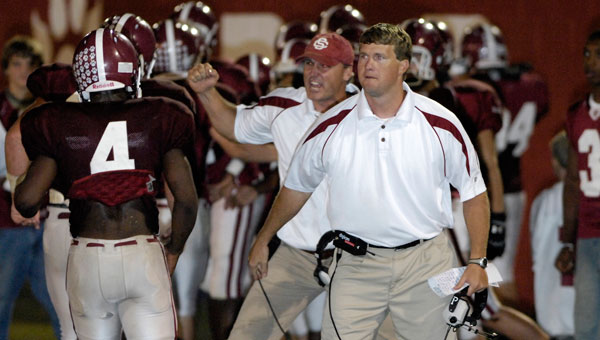 Ryan Herring is leaving Shelby County High School to take over as the new head football coach at Lincoln High School following a six-year tenure with the Wildcats. (File Photo)

Herring said the Lincoln job will allow him to be closer to his roots, but he’s leaving “the best job” he ever had.

“I’m leaving a great place,” Herring said. “The relationships were what it was all about. I coached some great kids, great citizens and great people.”

“(Herring) is a great coach,” Beasley said. “He’s the most knowledgeable football coach I’ve been around. He’ll do a great job.”

Samford University junior linebacker Darion Sutton, a former Shelby County standout under Herring, said he was saddened when he heard about Herring’s departure.

“It hurt when I found out,” Sutton said, “but there’s a time when you’ve got to move on. Coach Herring was different than most coaches. It wasn’t all about winning. It was about building a friendship and a relationship with his players.”

Herring led the Wildcats to a 40-25 overall record in his six seasons at the helm. Herring led Shelby County to an 8-4 record and an Alabama High School Athletic Association Class 5A playoff victory in his first season as a head coach in 2006. Shelby County defeated Valley in the first round of the Class 5A playoffs before suffering a one-point loss on the road at UMS-Wright in the second round.

Following a 6-4 mark in 2007, Herring led the Wildcats to a 19-1 combined record during the regular season in 2008 and 2009. Herring’s team captured the Class 5A, Region 5 championship and won its playoff opener against Chilton County in 2008.

The Wildcats compiled a combined 6-14 mark in Herring’s final two seasons, including a 4-6 record last season.

Lincoln went 7-5 last season under first-year coach Charlie Dampeer, who retired from coaching in Mississippi at Pontotoc High School before the 2011 season. Dampeer returned to Mississippi following the season.

Lincoln defeated St. James in the first round of the 2011 Class 4A playoffs before ending its season in week two of the playoffs with a loss to Bibb County. The 7-5 season was a six-win improvement from the Golden Bears’ 1-9 mark in 2010.

Herring, the son of longtime Oxford High School coach Robert Herring, played for his father at Oxford before playing in college for two years at the University of North Alabama in 1995 and 1996. Herring was a member of the Lions’ NCAA Division II national championship team in 1995.

Herring’s father was recently inducted into the Calhoun County Sports Hall of Fame following his 117-43 mark at Oxford during a 14-year coaching career, which ended when he retired in 1998. Robert Herring led the Yellow Jackets to three AHSAA Class 5A championships at Oxford, including a title in 1993 with Ryan serving as an all-state defensive back on the team.

Lincoln sits 17 miles and only three exits away from Oxford, where Herring was raised, on Interstate 20 in east Alabama.

Sutton said he believes the next Shelby County coach will have a plenty of talent and resources to work with at the Columbiana school.