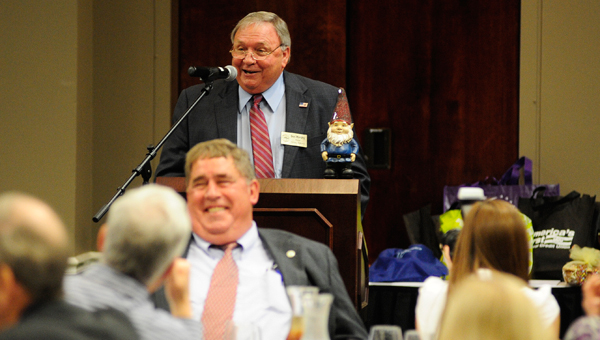 Twelve of Shelby County’s mayors said economic times are getting better in their cities during the Greater Shelby Chamber of Commerce’s annual mayoral luncheon Feb. 29 at the Pelham Civic Complex.

During the luncheon, representatives from Alabaster, Calera, Chelsea, Columbiana, Harpersville, Helena, Indian Springs Village, Montevallo, Pelham, Westover, Wilton and Vincent gave brief summaries of the happenings in their cities over the past year.

Frings said the city likely will soon be getting a new national restaurant chain, and said two large new corporations soon will be locating to the Shelby West Corporate Park.

“We have a lot of exciting times ahead. There’s a lot happening in Alabaster,” Frings said.

“We’re doing fine here in Pelham. It’s been real good,” Murphy said. “I love all these mayors. I love serving with them. We’ve got a great county, and I’m proud of it.”

Calera Mayor Jon Graham said his city has not been faced with the same housing downturn other cities have seen, and issued 117 new home building permits last year.

Chelsea Mayor Earl Niven said several new businesses will soon be coming to his city, including a Bojangles and a Wendy’s. Chelsea also recently donated $500,000 to the Shelby County Board of Education to build a full-size gymnasium to use for city sports in Chelsea’s new elementary school. 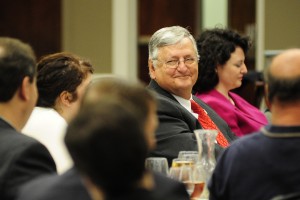 Helena Mayor Sonny Penhale said engineers soon could begin designing a bypass road around the northern part of the city, and praised the Shelby County School System for working to bring a high school to the city.

Indian Springs Mayor Steve Zerkis said his city has purposely seen little development over the past year, and said Indian Springs was the “only town in America to have two schools win Blue Ribbon Awards.”

Montevallo Mayor Ben McCrory said the Montevallo City Council recently voted to borrow $1.5 million to fund a downtown revitalization project, and said the city soon will hold a ribbon-cutting ceremony to kick off the project.

Westover Mayor Mark McLaughlin said his city has seen an increase since last year in the number of business licenses it has issued, and said traffic signals soon could be coming to a few dangerous intersections on U.S. 280.

Wilton Town Clerk April Price, who spoke on behalf of Wilton Mayor Joe Fancher, said Wilton officials recently began visiting with their residents to “find out what they want” from their city officials.

“There are some good ideas out there,” Price said.