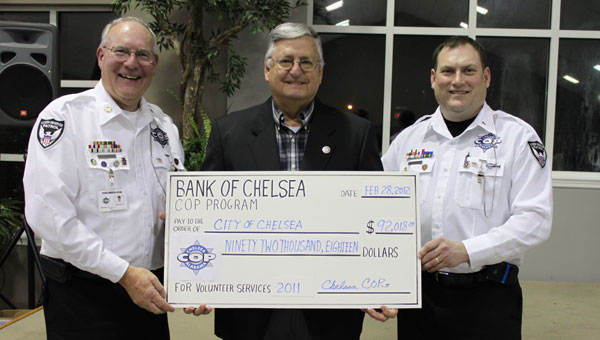 Dale Neuendorf and Robert Burnett present the amount of how much the COP program saved the City of Chelsea to Mayor Earl Niven Feb. 28. (Reporter photo/Christine Boatwright)

CHELSEA – Men and women in uniform were awarded for their community dedication at a Feb. 28 meeting at Liberty Baptist Church.

The annual awards dinner for the Chelsea Citizen Observer Patrol recognized the commitment of the volunteers to their city.

The COP program had many improvements in 2011, including an additional patrol car, 12 handheld radios, 24-hour patrol exercises, additional CPR training and a “ghost car,” which featured a lifelike mannequin named Woody.

The program also acquired a smart radar sign that reflects the speed of oncoming traffic. If a car travels more than five miles per hour above the speed limit, the sign will emit a strobe light, and will take a picture of the car to pass along to COP Director Robert Burnett and the Shelby County Sheriff’s Office.

In 2011, the COP officers patrolled for more than 4,300 hours, submitted 62 incident reports to the sheriff’s office and covered more than 30 special events in Chelsea.

If the City of Chelsea hired an entry-level police officer to patrol the same amount of hours as the COP officers, the city would spend $92,018 in 2011 for the officer’s salary. Therefore, the program saves the city resources.

Burnett awarded Joel Dauber as the 2011 Rookie Volunteer of the Year.

City Council member and former COP director Dale Neuendorf was named Volunteer of the Year. Neuendorf has volunteered about 1,800 hours since he joined the program in 2006, and now serves as the liaison to the City Council.

Burnett also named the late John McMunn as Volunteer of the Year.

“He was a great leader in volunteer service and to members of COP and members of Chelsea,” Burnett said.

“The COP program helps make this city what it is and what I believe is the greatest city in the country,” Burnett said.

Representatives from Aldi's and the City of Pelham gather in front of the store for a grand opening ceremony on... read more