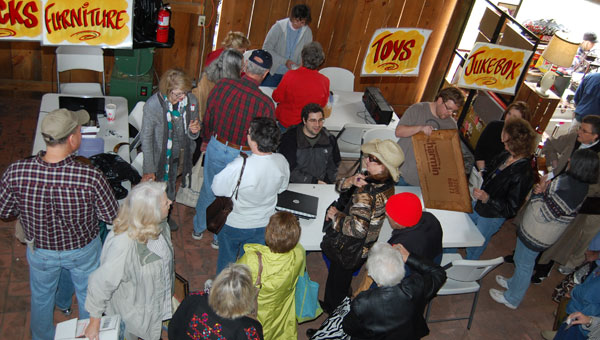 People from different areas in Alabama came out to have items appraised at the The Central Alabama Antique and Appraisal Market on March 3. (Reporter Photo/Nicole Loggins)

COLUMBIANA – The Central Alabama Antique and Appraisal Market was the place to be Saturday, March 3. People brought antique furniture, guns, family heirlooms and much more to be appraised by experts and some fared better than others.

The Friends of the Columbiana Public Library organized the event, and proceeds will be used to fund new programs and expand existing programs. They merged their usual four or five yearly events into one big production.

Although the appraisals were not certified, knowledgeable individuals who have extensive experience in antiques provided information about how much each piece could be valued. There were many items included in the 13 appraisal categories including toys, art, guns, pottery and glassware.

Rebecca Byrd had five metal Tootsie Toys from the 1950s appraised at $100 each.

“We were pleasantly surprised,” she said. “I had no idea what they were worth.”

Byrd also had a comprehensive collection of William Shakespeare and found that it was worth $15.

“What we thought would be worth the most wasn’t,” Byrd said.

Shelby resident, Fay Porter, was the talk of the market with her wooden throne chair from the 1800s that was appraised at $18,000. 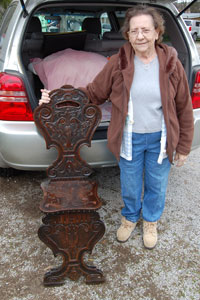 Porter poses with her throne chair from the 1800s. (Reporter Photo/Nicole Loggins)

Porter bought the chair for $250 at an auction in Chilton County nearly 30 years ago, and she bought two. Making her $500 investment worth nearly $36,000.

“I like to fell over,” Porter exclaimed. “They told me it was from Germany or London.”

Porter doesn’t plan to sell her newly-valued treasure, she said she wants to make it a family heirloom.

Music and entertainment was provided by the Sexy Tractor band and a DJ, numerous food vendors were also present.

Laurie Hackney, director of the Columbiana Public Library, said the appraisal market was beneficial for both the library for funding and also for people who came out to have items appraised, both local and travelers.

The Friends of the Columbiana Public Library are looking for the antique and appraisal market to become an annual event.