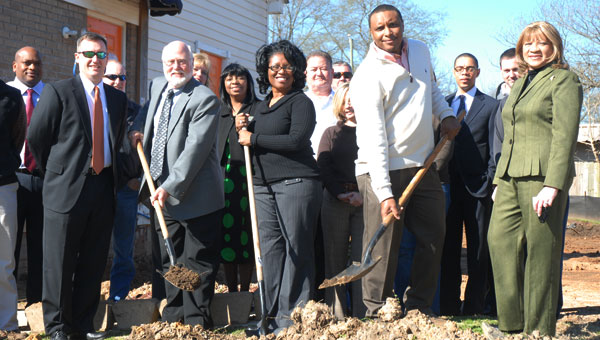 Kids, parents and staff members at Alabaster’s Young Impressions Child Care Center soon will have a safer location in the event of severe weather, after center officials broke ground on a new storm-resistant wing on March 5.

The daycare, which is on Seventh Street Southwest near the Thompson Sixth Grade Center, currently serves 42 children, but will be able to serve 98 kids after adding the more than 2,000-square-foot expansion.

The new wing will be made out of insulate concrete foam, which is able to withstand tornado-level winds, said center Director Yoko Brown.

“Our plans to expand were actually put in place before the April tornadoes. We just wanted to build something that was safer, healthier and green,” Brown said, noting the new wing will be mold resistant and will also help lower the daycare’s energy costs. “I didn’t feel the facility we have now was safe enough.”

Once completed in about two or three months, the new wing will include three new classrooms. The extra space will allow the center to serve more than twice as many children as it does currently, Brown said.

“We are full right now, and we actually have a waiting list,” Brown said. “That was another reason we wanted to add on.”

In the event of severe weather, the addition will hold the center’s kids, staff members and any parents who come to be with their children, Brown said. She said the new wing will be the first of its kind at an educational building in Shelby County.

“We appreciate you for the service you are doing, and for watching out for the safety of our children,” Alabaster Mayor David Frings told Brown during the groundbreaking ceremony.