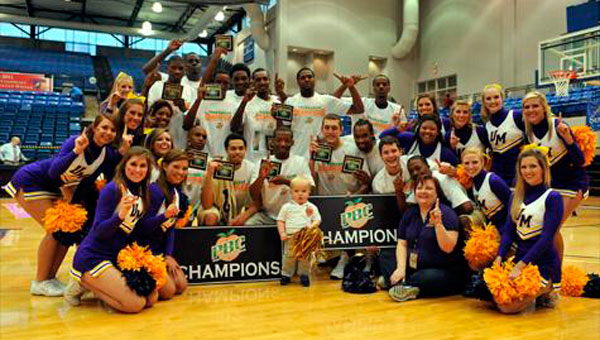 The University of Montevallo men’s basketball team has been selected as the top seed in the Southeast Region and will host the 2012 NCAA Division II Southeast Region tournament inside Bank Trust Arena March 10-13.

The Falcons (24-7), who claimed the Peach Belt Conference tournament championship March 4 following a 70-57 win over Columbus State University, are one of just 64 teams nationwide to be selected to the tournament. The Falcons will host games on Saturday, March 10, Sunday, March 11 and Tuesday, March 13.

Montevallo will play its first game on Saturday at a time to be announced against Barton College (20-9), which is the No. 8 seed.

Montevallo will host four games on Saturday, two on Sunday and the championship game on Tuesday.

This is the Falcons’ seventh trip to the NCAA Tournament and third as a No. 1 seed in the region. Montevallo is 13-6 all-time in NCAA Tournament competition, and 5-1 when hosting the NCAA Regional at Bank Trust Arena. The Falcons last hosted a regional at the end of the 2006-2007 season when they hosted the NCAA South Regional and swept all three of their games to advance to the Elite Eight.

More information on tickets, lodging, restaurants and other amenities will be available on the Southeast Regional Tournament website which will be launched in the next few days.