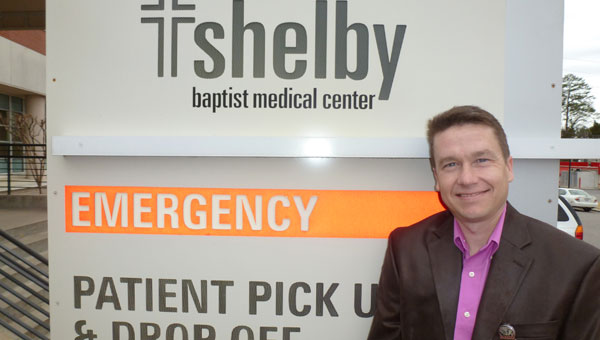 Administrative RepresentativeShane Armstrong in front of the emergency room, the first project in a long list of renovations at Shelby Baptist Hospital in the last six years. (Contributed)

Shane Armstrong is a man on a mission as the administrative representative at Shelby Baptist Hospital, a new position created in April 2011, as part of the hospital’s strategic plan to become more patient friendly and to have an advocate for patients, their families and visitors’ needs.

Shane is well known throughout Shelby County. He is son of Shelby County Tax Commissioner Don Armstrong and the late Virginia Stinson Armstrong and brother to the late Scott Armstrong. His parents were high school sweethearts at Shelby County High School, where Don was quarterback of the football team and Virginia was homecoming queen. After Don’s graduation from the University of Montevallo, the Armstrongs married and moved to Georgia for work, where Scott was born and Shane 19 months later.

The family moved back to Wilsonville when Shane was 6 to live in his maternal great-grandfather Offie Stinson’s shotgun house built in the 1800s.

“I remember our heat came from a potbelly stove. Scott and I shoveled coal into it from a huge pile out back to keep us warm,” said Shane.

The Armstrongs later built a house on 25 acres down the road where the family had a Christmas tree farm.

“We sold Christmas trees to provide money for Scott and my college education,“ said Shane. “Some of my fondest memories were helping people cut down their hand-picked tree.”

Shane graduated from Shelby County High School, where he played trumpet and was captain of the band. He was president of the Drama Club under the tutelage of drama coach Bonnie Atchison. He was very active in 4-H with his brother. He graduated from the University of Montevallo and began work as an ER tech at Shelby in 1994.

Life changed forever for the Armstrong family in 2005 when Scott was diagnosed with leukemia and in 2006 when Virginia was diagnosed with Alzheimer’s disease, which sadly ended in their respective deaths last year. Brother Scott died on May 20, 2011, and mother Virginia died Sept. 27, 2011.

Through these difficult years, Shane experienced first-hand the issues of patients and families dealing with difficult times. That experience gives him the unique position to truly understand and care about patients and their families.

“Our desire is to make Shelby Baptist more patient friendly,” said April Weaver, director of Business Development and Marketing. “Shane is our sunshine through the rain. He lives the Baptist mission though his work, ‘I am here for you.’”

Bring your treasures to the Antique and Appraisers Market