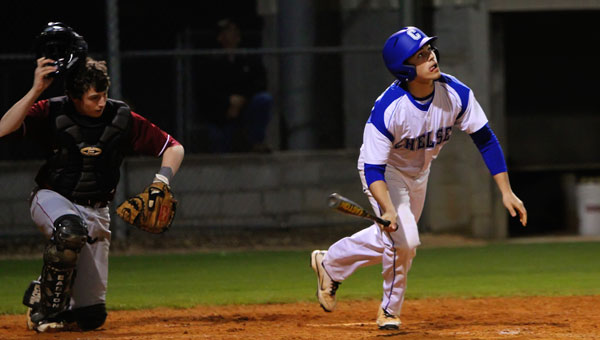 The Hornets used three 6-run innings to take down the Wildcats.

Chelsea scored six more runs in the bottom of the fourth inning to race out to an 18-3 lead before Shelby County scored its final run in the top of the fifth inning.

Matthew Graben led the Hornets at the plate as he went 3-for-5 with three singles. Graben drove in two runs and scored two runs in the victory.

Hobbs picked up his second win on the mound this season in his third complete game. Hobbs gave up four runs, including two earned runs, on six hits with nine strikeouts and a walk in the complete-game victory.

Evan McNeal led Shelby County as he went 2-for-3 at the plate and scored two runs.

Josh Pennington went 1-for-3 and drove in two runs. Dakota Falkner finished 1-for-3 with a double. Evan Nash went 1-for-3. Brandon McKinney, Bailey Benton and Jacob Pennington each went 1-for-2 at the plate.

Benton and Chad Wave scored one run each for the Wildcats.

Falkner took the loss after giving up six earned runs on six hits with a strikeout and a walk in 1 2/3 innings.

Jacob Tidmore allowed one earned run on four hits with a strikeout and three walks in the final inning.