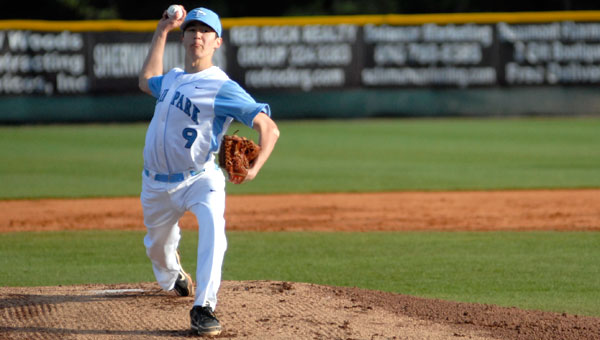 HOOVER — Spain Park High School starting pitchers put together a pair of strong outings March 6 in a doubleheader against rival Hoover, but a lack of offensive production was too much for the Jaguars to overcome in back-to-back 3-1 and 6-0 losses to the Buccaneers.

Spain Park dropped the opening game 3-1 despite a strong effort by sophomore Josh Rich on the mound.

Rich allowed three runs, including one earned run, on six hits with three strikeouts and a walk in a complete game.

Josh Close led the Jaguars at the plate after going 2-for-3 with a pair of doubles. Close scored Spain Park’s lone run in the doubleheader.

The Jaguars took a 1-0 lead in the bottom of the first inning when Close reached on a Hoover error and advanced to second base on a sacrifice bunt by Hunter Hall before scoring on another error by the Bucs.

After Hoover plated two runs in the top of the fifth inning on a Spain Park error to take a 2-1 lead, the Jaguars left runners stranded on second base and third base.

Close doubled down the right-field line and Hall was hit by a pitch, but the pair of baserunners were stranded following back-to-back strikeouts to end the inning.

Hoover added its final run in the top of the sixth inning to push its lead to 3-1 before the Jaguars threatened again in the bottom half of the frame.

Paul Angel led off the inning by being hit by a pitch and Freeman singled to right field. The baserunners advanced on a sacrifice bunt by pinch-hitter Peyton Walsh before the inning ended with back-to-back groundouts.

White singled in the bottom of the seventh inning, but the Jaguars couldn’t get a baserunner into scoring position.

The Jaguars dropped the nightcap 6-0 despite a career night by Freeman on the mound.

The Spain Park senior struck out a career-high 13 batters with only one walk in five innings. Freeman allowed three unearned runs on three hits.

Close, Freeman and Angel led the Jaguars with a single each.

Hoover scored three runs in the top of the fifth inning to take a 3-0 lead.

Spain Park’s best scoring opportunity came in the bottom of the fifth inning when Dustin Cowart reached on a walk and advanced to second base on a bunt single by Close. However, Hall’s pop up to third base left both baserunners stranded.

The Buccaneers added three more runs in the top of the seventh inning before the Jaguars were sat down in order in the bottom half of the frame.

Hoover starting pitchers gave up only one run and nine hits combined in 14 innings.

Brantley Ballenger gave up just one run, unearned, on six hits with four strikeouts in six innings in the opening game. Matthew Barnes allowed just three hits with seven strikeouts and a walk in a complete-game shutout in the nightcap.

FROM STAFF REPORTS The University of Montevallo men’s basketball team is ranked No. 22 in the latest National Association of... read more