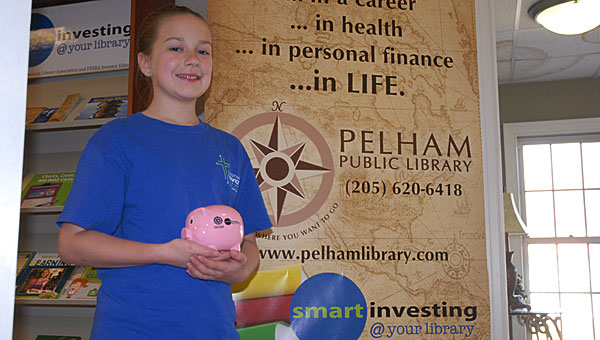 In the weeks leading up to Christmas last year, 11-year-old Pelham resident Anna Blankenship couldn’t make holiday ornaments fast enough to keep up with the demand.

“My mom thought of the idea of doing paintings, and I asked if we could make ornaments to sell,” said Blankenship, a fifth-grade student at Evangel Classical Christian School in Alabaster. “We sold a bunch of them. We had a lot of customers.”

During the holiday season, Blankenship decided to add the homemade clay Christmas ornaments to the “Handy Girl” business she had started a few months prior.

Before start of the 2011-2012 school year Blankenship and her mother, Donnalee, worked out a deal for the ECCS May 2012 trip to Washington, D.C.

“In May, I will be going to Washington, D.C. My mom said if I wanted to go, I had to raise half the money for the trip,” Anna Blankenship said. “So I started Handy Girl, where I would go clean someone’s house, mop or sweep.”

Donnalee Blankenship said she suggested her daughter raise half the cost of the trip in an effort to teach her about fiscal responsibility at a young age.

“We were trying to teach her that money is hard to come by, and that you have to work for it,” Donnalee Blankenship said.

Anna Blankenship charged modest prices for her Handy Girl services, such as $1 to sweep a floor or $2 to mop. After a few months of running her Handy Girl business, Anna decided to add Christmas ornament sales to the mix.

After selling “hundreds” of ornaments during the Christmas season, Anna Blankenship totaled the amount of money she had raised over the previous six months and discovered she had raised $600 of the trip’s $1,000 cost.

“It’s not that hard, but you still have to work at it,” Anna Blankenship said with a laugh.

Because Anna had to juggle her business endeavors with schoolwork, the experience taught her important life lessons, her mother said.

“I think she learned a lot. She was very excited and diligent about it,” Donnalee Blankenship said, noting Anna has plans to continue offering ornaments and Handy Girl in the future, and has recently been helping at her father’s law offices.

Pelham Library Director Barbara Roberts, who conducts the “Smart Investing @ Your Library” program, said the library has named Anna one of its “pint-sized penny pinchers.”

“We are so impressed with Anna’s project. This is just an example of financial literacy begun at a very young age,” Roberts said. “If there are any other kids out there who have a good story like Anna’s, we’d like to hear about it.”

For more information about the library’s programs, visit Pelhamlibrary.com.

FROM STAFF REPORTS The University of Montevallo men’s basketball team is ranked No. 22 in the latest National Association of... read more