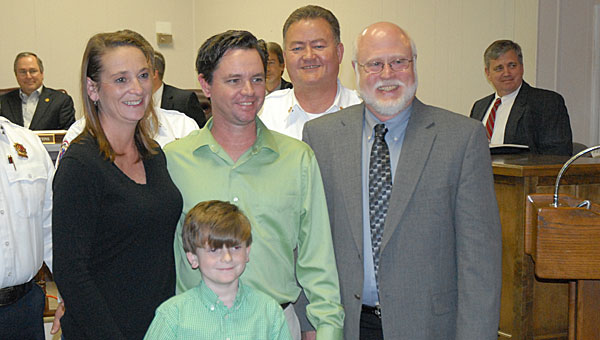 When a beeping sound awakened Alabaster resident Lisa Davis in the middle of the night on Feb. 14, she thought it was her alarm clock.

But when Davis reached over and hit the off button on her clock, the beeping didn’t stop.

“It took me a minute to realize it was the smoke detector,” Davis said, noting her 7-year-old son, Tripp, was sleeping with her while her husband, Michael, was out of town. “I just grabbed Tripp and ran out, and our dog followed us outside.”

Davis didn’t know it at the time, but a fire had started in the home’s master bathroom – just a few feet from where she and Tripp were sleeping.

“The response time for the fire department was four minutes,” Davis said. “The fire chief kept telling me how lucky we were that the fire alarm woke us up and got us out of there.”

Davis said the fire alarm may not have been functional had it not been for Tripp’s actions during the months leading up to the fire. Through the Cub Scouts and Alabaster Fire Department lessons at his school, Meadow View Elementary, Tripp learned the importance of regularly testing the smoke detectors in his house, formulating a fire escape plan and holding safety meetings with his parents.

“A lot of times, we will get caught up in our everyday lives. It’s not always something we think about,” Davis said of the smoke detectors.

Davis said Tripp frequently requests she and her husband check the functionality of the family’s smoke detectors.

“He’s too short to test them, so he will walk down the hall and ask us to check them,” Davis said. “And he will say ‘Mom, if you ever catch on fire, just stop, drop and roll.

“The firefighters made quite an impression on Tripp. It’s amazing what the fire department does,” Davis said. “He thinks they are really cool, but he truly listens to what they say.”

During the Alabaster City Council’s March 5 meeting, Alabaster Mayor David Frings presented Tripp with a Certificate of Recognition for his actions.

“Part of his homework was to go home and discuss fire safety with his parents. He went home and checked the smoke detectors and discussed an escape plan with his family,” Frings said. “Unfortunately, he got to test his plan.

“It’s safe to assume that the smoke detector saved both of their lives,” Frings said of Davis and her son.

Davis said Tripp is a “blessing,” and said she was unsure if they would have escaped the incident unharmed if it weren’t for his actions.

“The good Lord looked over us that night,” Davis said. “In my heart, I know Tripp was the reason we got out that night.”

Pelham resident Anna Blankenship, 11, recently raised $600 over the past several months to help fund her trip to Washington,... read more