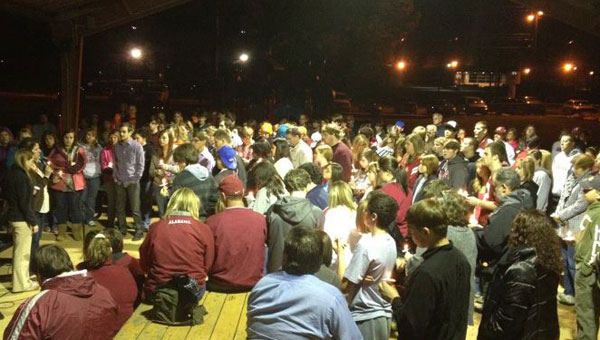 COLUMBIANA – MaKenzie Ashley Parsley, Adrienne Murer and Lase Higgins wanted to do something to honor their friend and classmate, Christopher Goodwin.

Goodwin was involved in a single-car accident on the morning of Feb. 29. Goodwin was driving on Shelby County 55 when he hit a slick spot in the road and struck a tree.

According to the Alabama State Troopers Office, emergency medical services arrived on the scene at 7:26 a.m., and the Shelby County High School student was trapped in the vehicle for nearly 80 minutes before he was transported to the Trauma Intensive Care Unit at UAB.

Goodwin has been placed in a medically induced state of paralysis and, as a result, does not know the severity of his injuries.

“They are keeping him sedated because of the ventilator and in a state of paralysis from the neck down,” said Melanie Sims Goodwin, Chris’ aunt.

“He does not know the extent of his injuries,” she said. “When he does come to, the doctors and nurses are sensitive to him and want to make sure his parents are there to explain it to him.”

In less than 26 hours the three girls, with the help of others, put together a candlelight vigil, made tie dye T-shirts that read “Pray 4 Chris,” hung signs all over the city of Columbiana and brought together nearly 200 of Goodwin’s friends, family, classmates, teachers and church family.

The vigil at the city park across from Elvin Hill Elementary opened with prayer and fellowship on March 4. Mallory Seal gave an update on Chris’s progress, and Rachel Cole, from Shelby County High School, led the group in prayer.

Rachel Johnson from The Lighthouse Community Church also lifted up the Goodwin family in prayer. A guitarist led the group in songs of praise and Ashley Freeman, Goodwin’s classmate and fellow trumpet player in the SCHS band, ended the night by playing “Amazing Grace” on Goodwin’s trumpet.