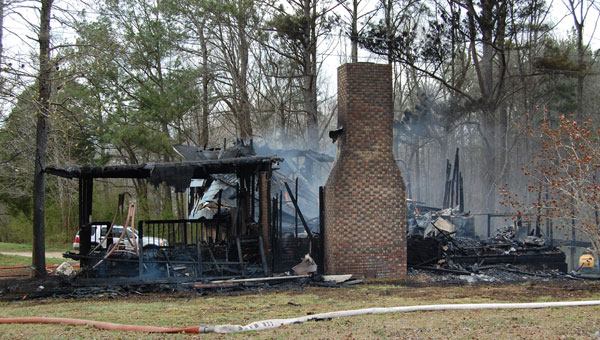 A fire destroyed a Columbiana home on Highway 97 on March 8. (Reporter Photo/Nicole Loggins)

COLUMBIANA – A fire destroyed a home on Shelby County 97 in Columbiana on March 8. Michelle Carter and Dequarius Welch lost their home to a fire that started around lunchtime.

“It had been burning for a while,” Kendrick said.

Neighbor Kay Exum said she arrived to her home across the street around 1:30 p.m. and found her neighbor’s home in flames.

“It was in full flames when I got home,” Exum said.

Homeowner Dequarius Welch, who was not home during the fire, said his neighbor alerted him.

“My neighbor called and said my house was on fire,” Welch said.

Welch said he has lived in the home for 15 years and his wife, Michelle Carter, has lived there for nearly 20 years. 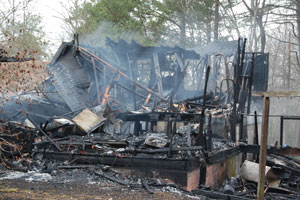 According to bystanders and responding fire departments, there were no injuries sustained during the fire, although Michelle Carter was in the home when it caught fire.

“My wife was downstairs when the house caught on fire,” Welch said. “(The fire department) don’t know what caused it.”

The cause of the fire could have been from a stove malfunction or food burning, Columbiana Assistant Fire Chief Jerry Lamb said.

“She said when she tried to go back up the stairs, she couldn’t. It could have been a stove malfunction or food on the stove.”

This isn’t the first tragedy to strike the family. Their daughter, Brynleigh Welch, died in 2010 after a car collided with the ATV she and her brother were riding near Alabama 25, according to a previous story by the Shelby County Reporter.

FROM STAFF REPORTS For years, various groups and organizations have tried to positively influence the national problem of college-age binge... read more