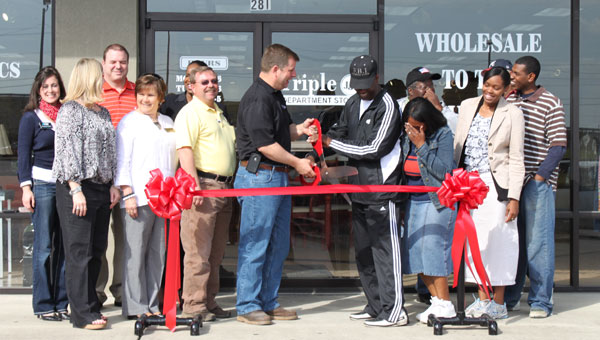 Eddie and Tenette Stewart, right, cut the ribbon for their second Triple J Department store in Calera March 8. Mayor Jon Graham, left, and members of the Calera Chamber board assist in the ribbon cutting, as well as members of Eddie Stewart's church, Union Baptist Church in Columbiana (Reporter photo/Christine Boatwright)

CALERA – As a result of business booming, the owners of Triple J department store in Calera opened a second store on March 3.

Eddie and Tenette Stewart opened the first Triple J store in June 2011 and named the business after their three children, Jeremy, Jonathan and Jalisa.

“After the first of the year, we decided to expand,” Tenette Stewart said at the second store’s ribbon cutting March 8. “We knew we wanted to open a second one. We didn’t know where, but we knew we needed to expand.”

The stores offer everything from antique furniture and clothing to mopeds and flat screen televisions.

“He likes to get odd pieces because it attracts people,” Tenette Stewart said.

The family moved to Shelby County from Georgia when Eddie felt the call to pastor Union Baptist Church in Columbiana. The Stewarts live in Montevallo and run their business out of Calera.

“The stores are five minutes apart, so if we don’t have it here, we send them there,” Eddie Stewart said.

FROM STAFF REPORTS Alabaster officials said they expect the city to save more than $700,000 after the City Council approved... read more