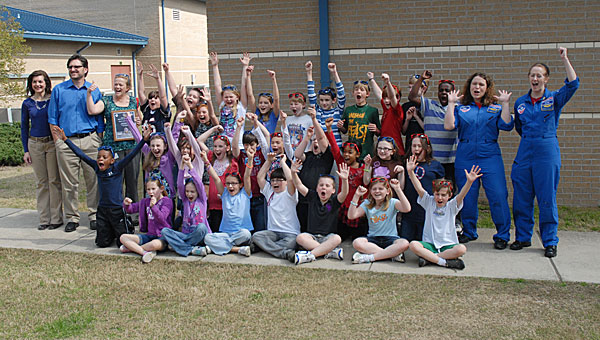 When Valley Intermediate School fourth-grader Neil Furman saw news reporters and camera crews setting up in his classroom, he didn’t know what to expect.

“I thought they were just doing this for all the finalists. I didn’t know they were going to tell us that we won,” Furman said, as he donned a pair of blue Space Camp sunglasses he had received just a few minutes before. “It just kind of blew my mind. I had to pinch myself like five times to make sure I wasn’t dreaming.”

After lunch on March 8, representatives from the Huntsville-based Rocket City Space Pioneers and Huntsville’s Space Camp surprised Karen McDonald’s fourth-grade class at VIS by announcing the class had won the Space Pioneers’ “Name the Lander” contest.

The Rocket City Space Pioneers, a group led by Huntsville’s Dynetics company and composed of several businesses, instructional institutions and nonprofit organizations, are one of 26 teams in the world working to win Google’s Lunar X Prize competition.

Through the X Prize competition, Google is offering $30 million to the first privately funded team to send a robot to the moon capable of completing a series of exploration and transmission tasks.

The Rocket City Space Pioneers partnered with the Alabama Department of Tourism and the state Department of Education to solicit names from thousands of fourth-grade students across the state for the team’s lunar lander.

McDonald said Furman came up with the name “Spirit of Alabama,” and the idea was discussed and voted on by the whole class before it was sent into the competition.

“This is what teamwork does,” McDonald said, as her classroom continually erupted into cheers. “We chose the name spirit because it represents a fire within. We want Alabama to be at the beginning and at the front of the pack.”

Furman said he chose the name because he “felt Alabama has a lot of spirit.”

For winning the contest, the whole class will spend three days at Space Camp in Huntsville. McDonald also won a $500 gift card to purchase classroom supplies.

Rocket City Space Pioneers team leader Tim Pickens told the classroom winning the prize was a “big deal,” and thanked the students for entering the contest.

“We got a lot of good names. We liked your name because it means a lot of different things,” Pickens said. “We thought it was really cool. We are proud to have you guys as a part of our team.”