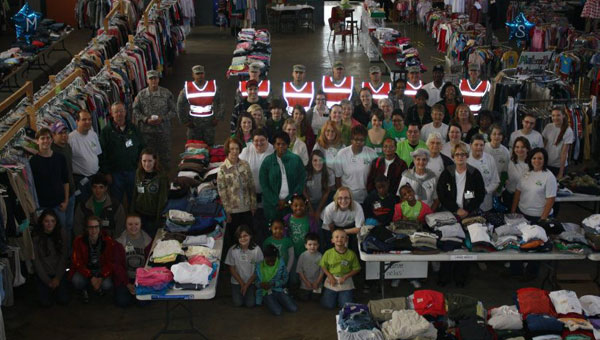 CALERA – Calera Acts of Kindness gave away more than 20,000 items of clothing, as well as toys, household items and other goods to more than 500 people in need March 3.

More than 135 volunteers assisted during the week of preparation and the giveaway. New volunteers including groups from the University of Montevallo Baptist Student Ministry and youth groups from Chelsea and Calera joined the giveaway, as well as many members who have been with AOK for years.

The items remaining after the giveaway were given to urban missions in Birmingham. Jason Williams, Briarwood Presbyterian Church’s urban pastor to Fairfield, took all the clothing remaining in the men’s department to a re-entry ministry called Shepherd’s Fold in Birmingham, Krueger said.

“What began as a once-a-year winter coat giveaway has now turned into a year-round opportunity to help our neighbors in need,” Krueger said. “God has always provided all that was needed, He will continue to provide — we are expectant of what He will do next and how He will use Calera Acts of Kindness in the future.”

Calera AOK has a goal of collecting more than 1,000 stuffed animals between now and the Calera Christmas Parade in December. These stuffed animals will be used to give as gifts to the children along the parade route. AOK used the stuffed animals in the 2011 parade to help remind folks of the upcoming Spring Giveaway. A card with the giveaway details will be attached to each stuffed animal in hopes that those with a need will continue to be reached.