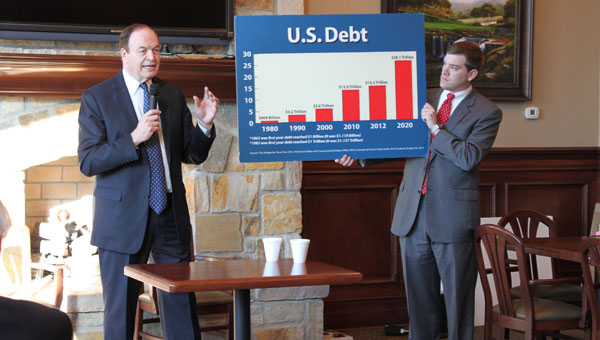 In regards to Tuesday’s primary elections, Shelby said he would be in support of the Republican candidate.

“We do have a chance to win the presidency this year,” Shelby said. “I don’t know if this Tuesday someone will move ahead of the others. It could be a fight all the way down. They’ve got to have some values and stand for something. I think they all would do OK.”

The U.S. government is borrowing 36 cents on every dollar spent, according to Shelby.

“We’re on the same road as Greece, Portugal and Spain. We’re borrowing and spending. Borrowing from who? From China,” he said. “We’re the largest debtor nation in the world, and we’re the richest nation in the world. This is crazy financial suicide.”

Serving up pancakes for children