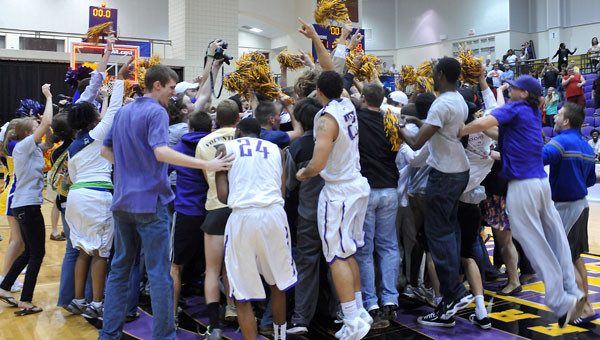 MONTEVALLO — University of Montevallo students are well known for their creativity.

Antoine Davis, a senior on the Falcons’ men’s basketball team, is no different from his fellow students, who put on College Night, the longest-running homecoming tradition in the country, from scratch.

Davis needed a little ingenuity in the final seconds with the Falcons trailing Lincoln Memorial University by one point in the NCAA Division II Southeast Region tournament semifinals March 11 at Bank Trust Arena. With the ball unexpectedly in his hands and the clock winding down, Davis drove down the lane and banked in a runner with 6.7 seconds remaining to lift the Falcons to a 61-60 win over Lincoln Memorial in the semifinals.

“After the play broke down,” Davis said, “the only thing I could do was improvise and make a play for my team.”

The game-winning basket, which earned Montevallo its sixth appearance in an NCAA Division II region tournament title game in school history, sparked the home crowd to rush the court for the first time since the Falcons won the South Region championship in 2007.

Montevallo coach Danny Young said the defensive stops allowed the Falcons to claw their way back into the game.

FROM STAFF REPORTS The University of Montevallo baseball team won two out of three games in a weekend series against... read more