Come learn to play bridge at the Columbiana Library for free 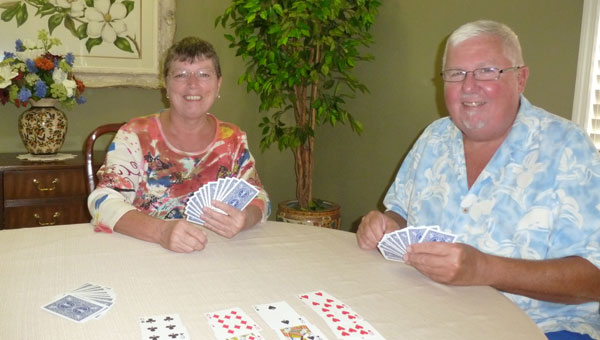 Linda and John Randall, life masters, directors and certified teachers of the Amercian Contract Bridge League, will teach a free clinic at the Columbiana Library. (Contributed)

Looking for something new to do in your life, a way to make some new friends and challenge your mind while having fun? Come learn to play bridge, or refresh rusty bridge skills, at the free bridge clinic March 21, 22, 23, from 9:30 a.m. to 2:30 p.m. at the Columbiana Library.

John and Linda Randall, directors of the Shelby County Bridge Club, will lead the instruction. The Randalls are well known in the bridge community. Both are life masters and directors with the American Contract Bridge League (ACBL). John, the teacher, and Linda, the facilitator, work as a team, something they have been doing for their 46 years of marriage.

John and Linda met at Lehigh University in Bethlehem, Penn. John grew up in a family playing bridge all his life. He taught Linda while dating, and the game has been a major part of their life since. After playing party bridge for 35 years, the Randalls began playing at the Birmingham Duplicate Bridge Club after the horrors of 9/11 in 2001 as a way to meet more people.

“It was very fulfilling,” said John. “We started playing Duplicate for ourselves. But we soon saw that this is a social outlet that is needed for others. We became directors and started the Shelby County Bridge Club in 2006, which averages 1,400 of tables annually and has held 10 sectional tournaments.”

The Randalls supervise five games every week at Riverchase Presbyterian Church Fellowship for the Shelby County Bridge Club. In 2007, they started sponsoring two tournaments every year. In 2008, they began a North Jefferson County Bridge Club, and in 2010 started a club in St. Clair County at the North Valley Church in Margaret.

In 2009, Columbiana Friends of the Library member Olivia Kalin approached John to teach bridge at the Columbiana Library, which began a dedicated bridge group that meets on Fridays. John and Linda have generously agreed to come again and teach this free clinic to help grow the group.

“The upcoming free Beginner’s Bridge Class covers all of the topics required in order to play bridge and enjoy yourself,” said John.

Administrative RepresentativeShane Armstrong in front of the emergency room, the first project in a long list of renovations at Shelby... read more