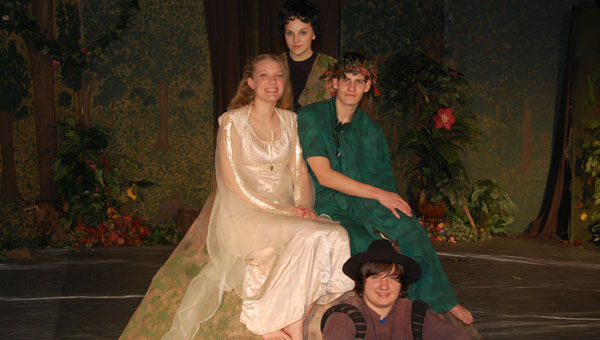 COLUMBIANA – Cornerstone Christian School is making its theatrical debut with a production of William Shakespeare’s “A Midsummer Night’s Dream” on March 15.

The play will be held in the school’s gymnasium at 7 p.m. A donation of $5 is suggested at the door.

Student J.J. Johnson, who plays Nick Bottom in the production, said acting in a play isn’t something he would normally do.

“It’s made me come out of my shell. I didn’t want to do it at the beginning,” Johnson said. “I’m glad I got this experience.”

Laurel Davis, who portrays Titania, said the experience is a valuable one for her.

“It’s a really great experience,” she said. “As a small school we don’t get these kinds of experiences often.”

Cornerstone senior Loey Peete is the assistant director for the production and said she learned a lot about her fellow students during the preparation stages.

“It’s been quite a learning experience,” Peete said. “We’ve been spending 12 hours a day together, so I’ve been learning when to be authoritative and when to leave them alone and let them do their own thing.”

Freshman Becca Blankenship plays the mischievous character Puck. Blankenship is a self-professed creative person and said the play is a way for her to channel that creativity.

“It’s a good outlet for my creativity since we don’t have any fine arts here this year,” Blankenship said.

Oberon is played by CCS student Maxwell Margerum, who said the production was a major accomplishment for him.

“It’s one of the hardest things I’ve ever accomplished, but it’s given me determination and self-confidence,” Margerum said.

Margerum said he learned his lines by fully delving into his character.

By NICOLE LOGGINS/Staff Writer HOOVER – A club for teenagers interested in politics has formed during the beginning of the... read more