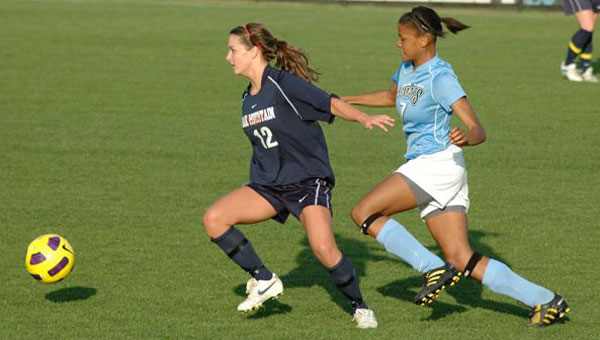 Oak Mountain High School defender Julianne Jackson tries to keep Spain Park forward Simone Charley away from the ball during the Eagles' 4-0 victory over the Jaguars in a rivalry match between the two teams March 13. (Contributed)

Toni Payne led the Eagles with two goals in the victory.

Bailee Harnett and Greer Maddox added one goal each. Vicki Hill and Haley Gerken recorded one assist each.

Payne gave the Eagles a 1-0 lead with her unassisted goal in the 30th minute, which gave Oak Mountain a one-goal lead at halftime.

Maddox capped the scoring in the match with her unassisted goal in the 72nd minute of the match.

The Eagles held a “Kick Out Cancer” fundraiser during the match with all proceeds going to the UAB Comprehensive Cancer Center.

Christian Adkins and Tyler Aderholt led the Eagles with one goal each in the victory.

Adkins gave Oak Mountain a 1-0 lead in the first half with his goal, which came during a scramble deep in the Jaguars’ penalty box.

Oak Mountain added a second-half goal when Mills Sproull worked the ball through the defense before slipping the ball to Aderholt, who tipped a Spain Park defender and put the ball in the back of the net.