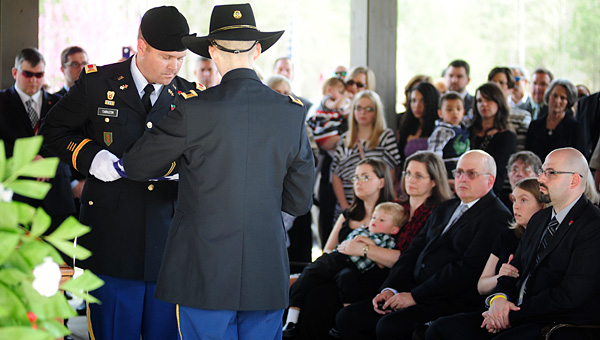 Standing in front of the casket of Matthew Blount, Troy Tarazon and A.J. Blount fold a flag before presenting it to Blount's wife, Melinda Copeland Blount, during the burial at the Alabama National Cemetery in Montevallo on March 13. (Reporter Photo/Jon Goering)

Blount, a Pelham native, also received several posthumous awards and recognitions from the state of Alabama and the U.S. Army Reserves during a memorial service held at the First Baptist Church of Pelham.

“I’m not saying goodbye to Matt today, I’m saying ‘I will see you again,’” First Baptist Pelham Pastor Mike Shaw, Blount’s childhood pastor, said during the memorial service. “And when I see you again, we won’t ever have to do this again.

“I will never, ever forget Matt Blount,” Shaw added. “First Baptist Pelham is a better church because of Matt Blount.”

Blount, who served in the Army for 13 years as a combat medic and on a mortar platoon in Iraq, passed away March 10 after a lengthy battle with cancer and leukemia.

Army Chief Warrant Officer 2 Troy Tarazon, who served with Blount at a base in Germany and in Iraq, said Blount always stayed calm during firefights, and was quick to accept military responsibility.

“He was all about self-sacrifice. He was not about himself, ever,” Tarazon said, noting Blount received the Army Commendation Medal and the Combat Medic Badge for his service in Iraq. “He was only 21 at the time (he was deployed to Iraq), and he had the responsibility of someone twice his age and rank.

“He was always the last guy to eat and go to sleep,” Tarazon added. “We got in many firefights, and he was always up front. He treated many casualties, and he definitely contributed to saving many lives.”

Tarazon called Blount the “definition of leadership,” and said Blount “knew how to rise to any challenge.”

“I was older than he, but he was my role model,” Tarazon said.

By NEAL WAGNER / City Editor The Shelby County Board of Education has one new member as a result of... read more