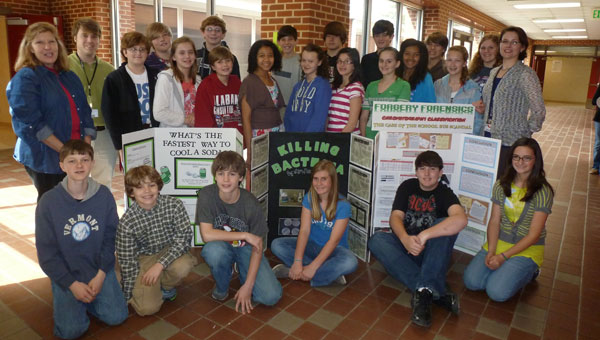 Columbiana Middle School has budding scientists in its midst. For the fifth year, CMS has held its school science fair where students are required to do an independent study and complete a science project. The winners competed in the UAB Regional Science Fair in Birmingham.

The science project is a team effort of students, parents and teachers. First, each student comes up with a research plan and hypothesis; second, the experiment is conducted; and last, the display is created.

“Science is a process of problem solving,” said Elizabeth Burttram. “The science projects are independent studies where the students do the work with their teachers as mentors and support by their parents.”

CMS is a member of the Alabama Math, Science and Technology Initiative, a hands-on, inquiry based instruction. All CMS math and science teachers are AMSTI trained.

According to a report by the U.S. Department of Education, AMSTI schools had gains of 28 days of extra schooling after one year in the program. The point of the AMSTI program is that students learn math and science by doing math and science. The CMS Science Fair is part of this learning process.

Bentley, Harmon, and Lee will go on to compete in the Alabama Science and Engineering Fair in Huntsville at the UAH campus April 5-7, 2012.

CMS is blessed to have dedicated teachers and parents who support these outstanding students.

Come learn to play bridge at the Columbiana Library for free