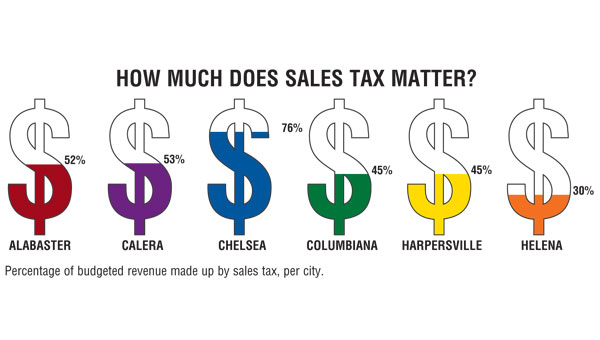 Information about half of our county’s cities and towns is in today’s paper; the other half will be featured in next week’s paper.

Because Alabaster is one of Shelby County’s shopping hubs, the city’s sales and use tax revenues took a major hit when the nation’s economy crashed several years ago.

In 2008, the city brought in just under $12.8 million in sales and use taxes, compared to $11.9 million last year. But during the past five years, Alabaster’s ad valorem property tax collections and business license collections have either remained steady or increased slightly.

Over the past five years, the city has also cut out about $2.7 million in expenses during a time of rising fuel costs.

Alabaster City Administrator George Henry said the city has budgeted conservatively over the past few years, and has shaved expenses by not filling some positions when a city employee retires, and by asking city departments to submit lean budgets.

“I can’t say enough about our employees and our department heads,” Henry said, noting the city has also saved nearly $2 million by refinancing its debt. “They seem to really step up and do more with less.”

Because sales and use taxes make up about 52 percent of Alabaster’s general fund revenues, the recent retail slump played a major role in the city’s conservative budgets over the past couple of years.

By NICOLE LOGGINS/Staff Writer On March 13 more than 37,000 Shelby County voters cast their ballots in the primary election.... read more