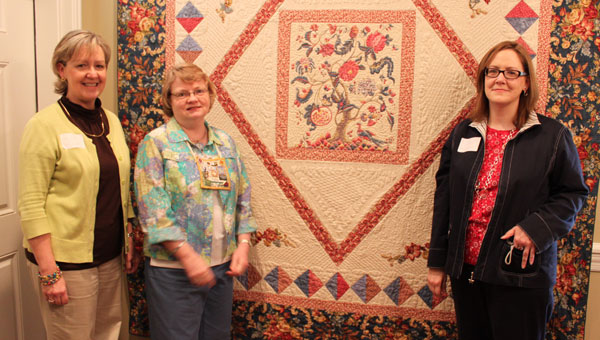 MONTEVALLO – The members of the Birmingham Quilters Guild presented a quilt to the American Village March 16 in memory of two beloved members.

The guild members worked for three years to create a quilt in memory of Dr. Tom Caldwell and his daughter, Cathryn Caldwell.

The fabric and design of the quilt are replicas of quilts from the mid to late 1700s. Tom Caldwell was an advocate and volunteer with the American Village, served as the president of the Shelby County Historical Society and had a passion for antique quilts, according to daughter, Kyle Caldwell Mann.

“Daddy would’ve been so pleased. He was an artist with fabric,” Mann said. “He could look at any quilt and tell you when it was made.”

The quilt will hang in the American Village’s President’s House.

“How honored we are to have it,” said Tom Walker, the executive director of the American Village. “You’re at a place that’s dedicated to helping people overcome a national amnesia. You, through your work, are carrying part of that legacy.”

“A lot of people spent a lot of time and love for Dr. Tom,” she said. “It takes all of us to get something this magnificent put together.”

The quilt features a center panel of unglazed chintz of the Tree of Life, which was ordered from Amsterdam. The quilt traveled from one guild member to the next for specific tasks.

“Your talent is one thing, but with the time and attention to history and research, Daddy would have been tickled,” Mann said.