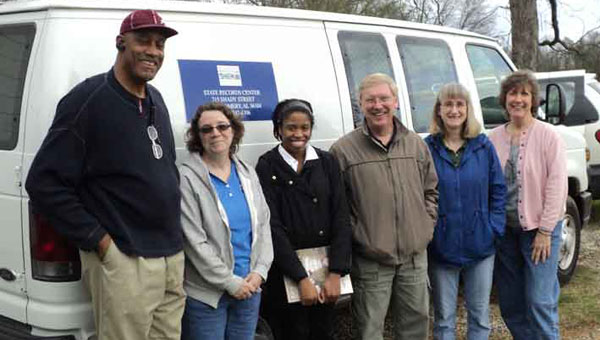 Datcher with the archive staff after the material had been loaded into the van for the trip to the archives in Montgomery on March 3. (Contributed)

HARPERSVILLE – The Datcher family roots run deep in Harpersville. Since 1879, family members have become successful farmers and community leaders, and many of the women have served as midwives, delivering children in the area for nearly 100 years.

The photographs, papers, and artifacts that document their history have been cared for and preserved by the family and now have a new home in the Alabama Department of Archives and History.

Peter Datcher is the unofficial Datcher family historian and has gathered and displayed items relating to the family and community in his parent’s former home for years.

“I’ve been researching about 11 to 12 years,” Datcher said. “I was told and shown a lot of things when I was young. My mother kept all the things that were handed down.”

Datcher began researching because he had questions about his family’s legacy, but he never expected to make such a large contribution to the state.

“When I started researching it was just to answer questions about who my great-grandfather and father were,” Datcher said. “I got to learn a lot. There were questions that I had and got answered.”

The materials document the lives of a family who started as slaves and ended up with one of the largest black‐owned farms in Shelby County. Items in the collection include rare early “tintype” photographs of newly freed slaves, a midwife’s uniform and satchel, farm journals from the 1930s and 1940s and a farm bell used to call workers in from the fields for dinner.

“Peter has done a fabulous job preserving, organizing and interpreting his family’s story and we appreciate his willingness to now share this incredible history with the rest of the state,” said Debbie Pendleton, assistant director for public services at the Alabama Department of Archives and History.

“This collection will add much to our understanding of the lives and accomplishments of freedmen after the Civil War, and will help us better tell the rich and complex story of Alabama history.”

“It was an unbelievable honor,” Datcher said. “Everybody, black or white, doesn’t get to be honored this way.”

All of the items are now housed at the Alabama Department of Archives and History, where many will
become a part of the new “Alabama Voices” exhibit, scheduled to open in 2013.

Ward, other locals to vote in RNC