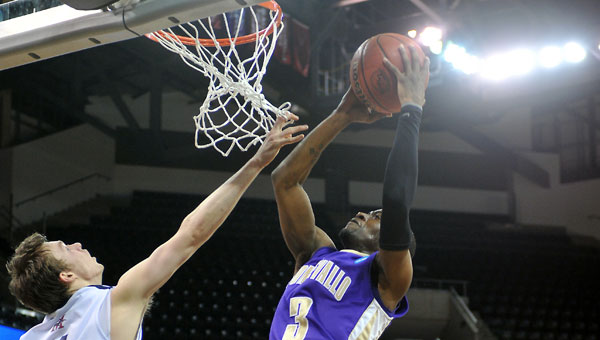 University of Montevallo senior guard Antoine Davis drives to the basket in the Falcons' 67-65 win over Metropolitan State College in the NCAA Division II Elite Eight quarterfinals March 21 at The Bank of Kentucky Center in Highland Heights, Ky. (Contributed)

University of Montevallo senior guard Antoine Davis knocked down a pair of free throws with 3.1 seconds remaining to earn the Falcons their first ever berth in NCAA Division II men’s basketball Final Four in school history following a 67-65 win over Metropolitan State College of Denver in a quarterfinal contest March 21 at The Bank of Kentucky Center in Highland Heights, Ky.

The free throws by Davis capped an impressive comeback by the Falcons, who trailed throughout the majority of the second half. The victory marked Montevallo’s first win in school history in the Elite Eight.

Montevallo coach Danny Young said he called a play to get the ball inside, but he knew he could count on Davis to make something happen in the final seconds if the play broke down.

“We were trying to run a high screen right there and get the big guy, (junior forward Drico) Hightower, the ball,” Young said. “If not, try to get (Davis) coming off the other side and get to the basket or get to the line.”

Following the foul, Davis calmly knocked down his two attempts from the free-throw line despite missing two earlier attempts at the charity stripe.

“It’s what I’d been waiting for, man,” Davis said. “I had been struggling the whole game at the free throw line. I was trying to concentrate and make sure I made these for my team. They were looking for me to step up. I’m a senior, so I’m glad they fell my way.”

Montevallo (28-7) will face defending national champion Bellarmine University, which knocked off the University of Alabama in Huntsville in the quarterfinals, in the NCAA Division II semifinal contest March 22 at 8:30 p.m. The semifinal battle between Montevallo and Bellarmine will be televised nationally by the CBS Sports Network, with the winner earning a spot in the national championship game March 24 at noon on CBS.

Davis led the Falcons with 18 points in the quarterfinal victory on 7-of-12 shooting from the floor. Davis finished with a double-double after dishing out a team-high 11 assists in the win.

D.J. Rivera added 14 points and a team-high four steals, including a last-second steal on a Metro State inbounds pass to seal the Falcons’ victory. Drico Hightower chipped in 11 points. Ryan May contributed 10 points on 3-of-4 shooting from the field, including a 2-of-3 performance from beyond the arc.

Jonas Brown, who knocked down 2-of-3 3-point attempts, and DeMarcus Catchings added six points each off the bench. Marvin Fitzgerald finished with two points.

Montevallo jumped out to a 8-2 lead in the first two minutes following a 3-pointer by May with 18:02 left in the opening half.

Metro State took its first lead, 15-14, following a layup by Demetrius Miller with 14:16 left in the first half. The Roadrunners extended their lead to nine points, 25-16, following a 3-pointer by Miller with 9:13 remaining in the opening half.

Montevallo chipped away at the deficit late in the first half, eventually cutting the Metro State lead to one point, 34-33, on the last basket in the opening half on a dunk by Catchings with 30 seconds remaining.

Montevallo temporarily took a one point lead, 35-34, following the first basket after the break on a jumper by Davis less than one minute into the second half.

The Roadrunners slowly built a lead and held onto to a slim margin. Metro State led by as many as eight points following a pair of free throws by Paul Brotherson, which gave Metro State a 58-50 lead with 4:49 remaining.

Montevallo closed the game with a 17-7 run to escape with the victory.

Hightower gave Montevallo its first lead since the opening minute of the second half with his layup with 21 seconds remaining, which gave the Falcons a 65-63 lead. After Metro State tied the game eight seconds later with a layup by Jonathan Morse, Davis was fouled and stepped to the charity stripe, knocking down a pair of free throws to clinch the victory.

Rivera intercepted the ball on an inbounds pass in the final seconds to keep the Roadrunners from getting last-second shot attempt.

“Our guys played good,” Young said. “I thought we battled hard all night long. It just seemed to be one-to-five points and we couldn’t get over the hump it seemed until the very end right there.”

UAH, which featured a pair former Shelby County high school standouts, ended its season with a 82-73 loss to Bellarmine in the quarterfinals.

Josh Magette, a former Spain Park High School standout, finished with six points on 2-of-11 shooting from the floor in the loss. Magette, the NCAA Division II assists leader, handed out 10 assists in his final collegiate game.

Ronnie Mack, a former Oak Mountain High School standout, finished 0-of-2 from the floor and grabbed one rebound in the loss.

FROM STAFF REPORTS The University of Montevallo senior guard D.J. Rivera was recently named a third team All-American by the... read more