Farm Day hoofs it to Montevallo 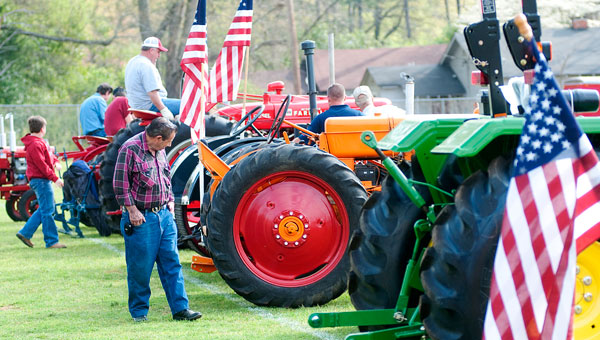 Visitors to Montevallo's Farm Day check out the tractors after their parade through town during last year's Farm Day. (File)

Prior to Farm Day, the FFA members will perform a skit and hold a petting zoo for Montevallo elementary school students on March 30.

The tractor parade will begin at 9 a.m. on Saturday morning. The route will run down Montevallo’s Main Street before ending at the high school’s football practice field.

“The two areas we worked on improving were the expanded kids’ area and a lot more agricultural displays and vendors. With all the people we have coming, we’ve asked them to do some kind of demonstration,” Barton said.

Farm Day will offer goat milking and dog obedience demonstrations, as well as a petting zoo, live music and food vendors. The event will conclude at 2 p.m.

The members of Montevallo FFA are asking for attendees to donate canned goods that will be given to local food banks.

The day will also have a silent auction featuring gift certificates and items from the community. The funds from Farm Day will benefit Montevallo’s FFA alumni scholarship fund, Barton said.

In addition to planning for Farm Day, the club has been collecting donations to add former Montevallo FFA advisor Keith Adair’s name to the FFA Wall of Honor. Adair passed away in February 2010 after a battle with cancer.

“It’s a very prestigious honor, as they only put on 10 to 15 people statewide every year,” Barton said of the Wall of Honor. “A lot of ag teachers go their whole teaching careers, and even 20 years after, without being put on the wall. It’s an honor that Mr. Adair is being put on the wall so early.”

Donation boxes will be available at Farm Day to raise the $1,000 needed to have Adair’s name added to the wall.

Ballantrae Golf Club in Pelham will host a memorial golf tournament on May 10 to benefit The Philip Mahan Davis... read more