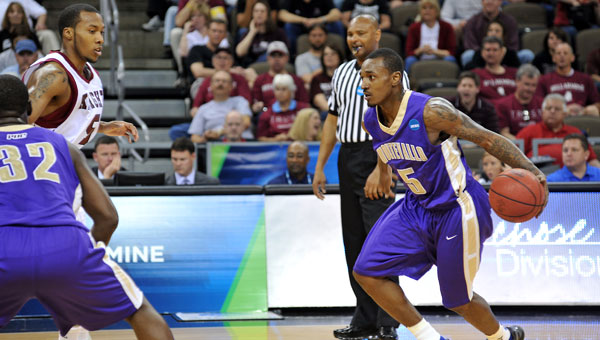 University of Montevallo senior guard D.J. Rivera waits for a teammate to set a pick in the Falcons' 79-72 win over Bellarmine University in an NCAA Division II semifinal contest March 22 at The Bank of Kentucky Center in Highland Heights, Ky. (Contributed)

Scarlett and silver blanketed all four corners of The Bank of Kentucky Center during the University of Montevallo men’s basketball team’s battle with Bellarmine University in a NCAA Division II semifinal contest March 22 in Highland Heights, Ky.

Less than a two-hour drive away, thousands of the defending NCAA Division II national champions’ fans made the trek from Louisville to the suburban Cincinnati community to cheer on the Knights toward a second consecutive title. Students, band members and cheerleaders provided vocal support throughout the Final Four matchup.

Tim Brando, the veteran play-by-play announcer on the CBS Sports Network broadcast, succinctly described the setting the Falcons’ faced with their first trip to the national championship game in school history on the line.

“Let’s face it, this is an away game (for Montevallo),” Brando commented. “This is a road game.”

The Falcons didn’t let the staggering atmosphere bother them at all, denying Bellarmine the opportunity to become the first back-to-back NCAA Division II national champion in nearly two decades following a 79-72 win over the Knights in the Final Four contest.

Instead, Montevallo will play for its first national title in school history in its third trip to the NCAA Division II Elite Eight.

“(Montevallo) had a much smaller contingent,” Brando said, “but the resolve was pretty strong.”

The small, but vociferous, crowd from Montevallo made the most noise in the end, said Montevallo coach Danny Young.

“Our little group of fans were tremendous over there,” Young said.

FROM STAFF REPORTS University of Montevallo senior guard D.J. Rivera was recently named an All-American by the National Association of... read more